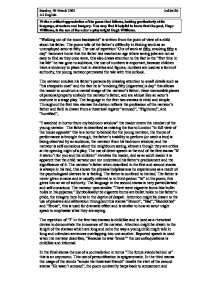 Write a critical appreciation of the poem that follows, looking particularly at its language, structure and imagery. You may find it helpful to know that the poet, Hugo Williams, is the son of the actor a playwright Hugh Williams.

Sunday, 09 March 2003 Jad Salfiti A2 English Write a critical appreciation of the poem that follows, looking particularly at its language, structure and imagery. You may find it helpful to know that the poet, Hugo Williams, is the son of the actor a playwright Hugh Williams. "Walking out of the room backwards" is written from the point of view of a child about his father. The poem tells of the father's difficulty in finding work as an unemployed actor at fifty. The use of repetition "Out of work at fifty, smoking fifty a day" hammers home that the father has reached an age where acting jobs are not as easy to find as they once were, this also draws attention to the fact is the "first time in his life" he has gone to auditions, the use of numbers is important, because children have a tendency ...read more.

The father is described as missing the bus to London "in full view of the house opposite" this is a horror to behold for the young narrator, the theme of performance is brought through, the father's inability to perform (or catch a bus) is being observed by an audience, the narrator from his bedroom window, and the narrator is self-conscious about the neighbours seeing, almost s though they are critics at the opening night of a play. The use of direct speech at the end of the first stanza "If it weren't for you and the children" involves the reader, and as an adult reader it is apparent that the child narrator can not understand his father's predicament and the significance of it. The narrator's father when described in the first and second stanza is always in his bed, this shows the physical helplessness he experiences as a result of the psychological distress he is feeling. ...read more.

Attention might be drawn to the length of the stanzas which are long and echo the way a young child might talk in long and unbroken sentences overlapping into one another. Reported speech is used when the narrator describes, "Because he was 'broke'" the use colloquialisms is childlike and informal. In the final stanza the use of a contradiction in terms "The future stands behind us" this is an oxymoron. This use of personification is epigrammatic. In the third stanza the usage of the words "amuse his theatrical friends" recalls the start of the second stanza "He wasn't amused", the poem constantly harps back to amusement and performance, everything is done to evoke a reaction, and the presence of an audience is always felt. Performance is used as a punishment "To punish me", this can be cross-referenced to the fact that the father's inability to perform in destroying him and is the ultimate form of punishment. ...read more.