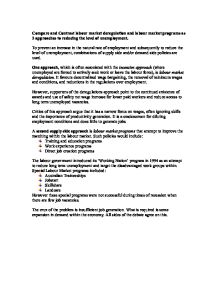 Compare and Contrast labour market deregulation and labour market programs as 2 approaches to reducing the level of unemployment.

Compare and Contrast labour market deregulation and labour market programs as 2 approaches to reducing the level of unemployment. To prevent an increase in the natural rate of employment and subsequently to reduce the level of unemployment, combinations of supply side and/or demand side policies are used. One approach, which is often associated with the incentive approach (where unemployed are forced to actively seek work or leave the labour force), is labour market deregulation. It favours decentralized wage bargaining, the removal of minimum wages and conditions, and reductions in the regulations over employment. However, supporters of the deregulations approach point to the continued existence of awards and use of safety net wage increase for lower paid workers and reduce access to long term unemployed vacancies. ...read more.

Such policies would include: * Training and education programs * Work experience programs * Direct job creation programs The labour government introduced its 'Working Nation' program in 1994 as an attempt to reduce long term unemployment and target the disadvantaged work groups within. Special Labour Market programs included: * Australian Traineeships * Jobstart * Skillshare * Landcare However these special programs were not successful during times of recession when there are few job vacancies. The crux of the problem is insufficient job generation. What is required is some expansion in demand within the economy. All sides of the debate agree on this. ...read more.