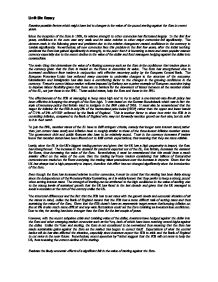 Examine possible factors which might have led to changes in the value of the pound sterling against the Euro in recent years.

Unit Six Essay Examine possible factors which might have led to changes in the value of the pound sterling against the Euro in recent years. Since the inception of the Euro in 1999, its relative strength to other currencies has fluctuated largely. In the first few years, confidence in the euro was very weak and its value relative to other major currencies fell significantly. The dotcom crash in the following years and problems due to the relative changeover caused confidence in the currency to tumble significantly. Nevertheless, all new currencies face this problem in the first few years, after the initial teething problems the Euro has gained significantly in strength; to the point that it is becoming a more and more popular reserve currency especially due to the recent decline in the value of the dollar and fund managers hedging against the dollar into commodities. The main thing that determines the value of a floating currency such as the Euro is the confidence that traders place in the currency given that the Euro is traded on the Forex to determine its value. The Euro has strengthened due to increased confidence from traders in conjunction with effective monetary policy by the European Central Bank. The European Monetary Union has enforced many countries to undertake changes to the structure of the economy. Globalisation and immigration has also been a contributing factor to the changes in the growing confidence in the currency. ...read more.

Due to this, the sterling has been stronger than the Euro for the last couple of years. However, with the recent subprime crisis and tumbling value of the dollar, investors have hedged against the dollar into the Euro and other emerging market currencies such as the Yen; both of which have been reaching record highs against the dollar. Unlike the Yuan and sterling, the Euro is not considered to be overvalued thus meaning that the Euro has made sustainable gains against the Euro as the market has begun to correct itself. Expectations of what the central banks will do has also affected the situation, especially since investors expect the ECB to stick and the Bank of England to cut rates in the near future. Nonetheless, recent speeches by Trichet suggest that the ECB will cut rates to help the US, thus reversing the current decline of the sterling. Evaluate the likely economic effects of a significant fall in the value of sterling against the Euro. The Uk's balance of payments would become more positive as a fall in the value of sterling compared to the Euro would significantly increase exports as the EU would consume more British exports, as they are cheaper. This effect would be intensified given that the EU is the UK's biggest trading partner. This would also translate to an increased multiplier effect as exports move through the circular flow of income and aggregate demand could potentially shift to the left. ...read more.

This could lead to cost-push inflation and possible job losses as firms try to protect their profit margins, especially if they can't pass on higher business costs to consumers in fear of reducing demand. Nonetheless it could be argued that this would be better for businesses as it would force them to become efficient and thus improve their comparative advantage on the global scene. (Inefficient businesses would be pruned - this had to be said for comic value) These measures and influences would be dependent on the size of the devaluation compared to the Euro, how quickly it occurs and the fall of the sterling relative to other currencies. Currently, the pound is strong against the dollar and thus meaning that a lot of the above mentioned effects would be offset because the US is the UK's single biggest trading partner in terms of countries rather than states. Given that the pound is also relatively stable against all the other currencies the effects of the fall in the sterling against the Euro would be minimal. It also depends on how the situation can be rectified and whether the underlying problem is structural or merely one that could be eased by increasing interest rates. Of course the situation of the economy needs to be taken into account, thus meaning that even if the Bank of England wanted to increase rates to increase the value of the pound by attracting flows of hot money into the economy that would not be possible to the significant downside pressures affecting the economy. ?? ?? ?? ?? ...read more.