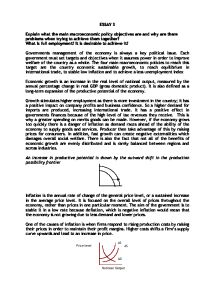 Explain what the main macroeconomic policy objectives are and why are there problems when trying to achieve them together? What is full employment? It is desirable to achieve it?

ESSAY 3 Explain what the main macroeconomic policy objectives are and why are there problems when trying to achieve them together? What is full employment? It is desirable to achieve it? Governments management of the economy is always a key political issue. Each government must set targets and objectives when it assumes power in order to improve welfare of the country as a whole. The four main macroeconomic policies to reach this target are the country economic sustainable growth, to reach equilibrium in international trade, to stable low inflation and to achieve a less unemployment index Economic growth is an increase in the real level of national output, measured by the annual percentage change in real GDP (gross domestic product). It is also defined as a long-term expansion of the productive potential of the economy. Growth stimulates higher employment as there is more investment in the country; it has a positive impact on company profits and business confidence. So a higher demand for imports are produced, increasing international trade. It has a positive effect in governments finances because of the high level of tax revenues they receive. This is why a greater spending on merits goods can be made. ...read more.

Inflation is a possible cause of higher unemployment, particularly if one country experiences a much higher rate of inflation than another, leading to a loss of international competitiveness and a subsequent worsening of their international trade performance. By stabilizing inflation employment and economic growth continues increases, but international trade is low because inflation incentives imports due to a price increase hence better profits for the importers. International trade is important because countries need to export goods and services to finance imports of products they cannot supply in the country. Exports represent an injection of demand into the circular flow of income. There is a potential improvement in economic welfare if countries specialize in the products in which they have comparative advantages and then trade with other nations. International competition stimulates higher allocative and productive efficiency. Furthermore imports can help to satisfy excess demand for consumers. A trade deficit during a boom helps to reduce demand- pull inflation. In order to reduce inflation because it increases as prices arise due to the trade efficiency, governments introduces import controls, this are barriers to the free movement of good and services between countries. Tariffs or tax on imports are used to restrict imports and raise revenue for the government. ...read more.

Using all the labour resources means using even the low skilled people. Another obstacle to reaching full-employment is the risk that wage and price inflation will pick up as more people find work and total spending in the economy causes businesses to raise prices. When unemployment is falling there is pressure on firms to bid up wages both to attract and retain staff. Labour shortages that cause acceleration in wage inflation might persuade banks to increase interest rates. This would slow down the economy and the rate of new job creation might suffer as a result. Although falling unemployment will create inflationary pressure in the economy, it has been proved that unemployment and inflation have continued to fall together. It can be explained as that labour market becomes flexible. It is better able to match the unemployed with the new jobs, and the economy has been able to attract sufficient new workers into the labour force to meet a rising demand for labour. Inflation can be kept low through the impact of new technology and more intense competition in many markets. In conclusion the four main macroeconomic objectives are difficult to achieve together because the improvement of one involves scarifying other one. Reaching full-employment is not desirable as it causes damages in the total economy, however a 2% of unemployment is considered full-employment in first world countries, and that is the target. ...read more.