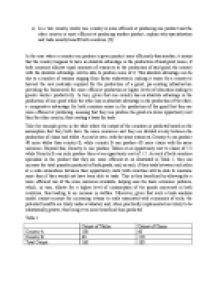 However, despite this, there may still be a basis for trade due to comparative advantage. As seen in table, Country A can only produce coal at an opportunity cost to oil of 1 : 2, however, Country B can produce the coal at an opportunity cost of 2 : 1. Thus, Country B will have a comparative advantage in the production of coal despite being less efficient at it. After specialisation and trade at a ratio of 1 : 1 as seen in table 4, both countries can serve to benefit, Country B can consume an extra 100 units of coal if maintaining the same consumption level of Oil as seen in table 3, or an extra 100 units of Oil if it maintains the same level of coal consumption. Similarly, country B can also consume an extra 100 units of coal following the specialisation and trade, thus creating a mutually beneficial situation, where, despite the absolute advantage of Country A in the production of both goods, both countries can still benefit from trade. One key benefit of this trade would be the increase in the potential quantities of each good consumed in each country due to the implementation of a trading possibility curve showing the maximum combination of goods that can be consumed following specialisation and trade. ...read more.