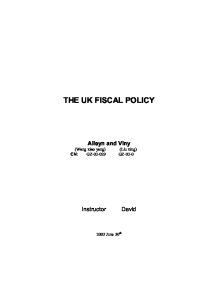 THE UK FISCAL POLICY Alleyn and Viny (Wang xiao yang) (Liu xing) CN: GZ-02-029 GZ-02-0 Instructor David 2003 June 30th Table of contains 1 Abstract 1 Introduction 2 Result and analysis 2 Taxation 2 The direct tax 4 The indirect tax 4 Government spending 5 Recommendation and conclusion 6 References Abstract Fiscal policy was relatively popular during the 1940s and 1970s. Generally, it is the use of taxation and government spending to manage the economy. In the UK today, the rate of direct taxes have been brought down over the past two decades, though the field was paradoxically increased, and there is a shift of the balance of taxation from direct tax to indirect tax. Also, the government spending has been increasing, which is well illustrated by the increasing PSBR (public sector borrowing requirement). Generally, the main reason of these changes will be shown in the paper. Generally, government usually has conflicting objectives be using the fiscal policy. For example, keeping balance of payment equilibrium may suppress the proper economic growth. Also, there may become technical problems. As a result, fiscal needs adjusting. ...read more.

Actually, the direct tax takes up an important part of the total tax revenue. As shown in the table below, (in billion pounds), the income tax and corporation tax together took up as much as 43% of the total tax yield on average from 1990 to 1997. (Advanced Economies Through Diagram). Historically, the direct tax rate in the UK was extremely high. Notably the income tax rate once reached 84% in the 1970s (understanding the economy). This is the result of the post-war Welfare State policy and other social benefits, which were the main part of the government spending in the 1950s and 1960s. However, the situation began to change since Mrs. Thatcher came into power. With the will to improve the efficiency of the UK economy, she brought down the rate for the direct tax, which may destroy the incentive for entrepreneur to create opportunities. Even after Tony Blair took office in 1997, the policy was still kept. In other words, there was a trend to reduce the tax rate on direct tax. According to statistic from the Inland Revenue, the tax highest rate is 40% in 2003. ...read more.

Here the problem is the conflict between full employment and inflation. For the UK government responding to this, it ought to deflate the economy, by giving a suspension to economic growth and an increase in employment. Besides of this, there are also technical problems as the reasons of time lag in the economy. The time lag contains of recognizing these problems the UK government should accelerate its handle speed by improving abilities of staffs and the level of techniques. Although despite with these problems, there are still some issues in the nature and application of fiscal policies here we not mention them all but just main ones. In summary, fiscal policy, which is well carried out in the UK, is, acing large contributions to the UK economy in recent years. And particularly to taxation changes, which made by UK government, supported the government to regular the level of the economic fluctuation efficiently and directly. The general trends of taxation now are turning from direct taxation mainly to the indirect taxation side. And besides this, the quantity of government spending is rising, and the scope pf it is also being enlarging. Fiscal policy is gradually becoming a mature, dependable and suitable measure to solve the economic problems happen in the UK. ...read more.