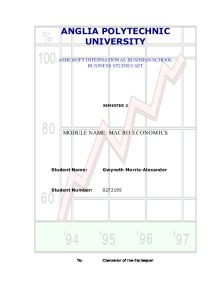 This report will highlight how Government policy could change to try to: Increase economic growth, Reduce unemployment, Reduce the Balance of Payments deficit, Reduce the inflation to 2.5%.

ANGLIA POLYTECHNIC UNIVERSITY ASHCROFT INTERNATIONAL BUSINESS SCHOOL BUSINESS STUDIES SET SEMESTER 2 MODULE NAME: MACRO ECONOMICS Student Name: Gwyneth Morris-Alexander Student Number: 0272195 To: Chancellor of the Exchequer From: Gwyneth Morris-Alexander Subject: Report on the Economy Date: May 10 2003 Dear Sir, The following report is based on the information stated as it relates to the topics indicated: > Inflation is 3% and the stated aim of Government is 2.5%. > Unemployment is 8%.........the Natural Rate is estimated to be 5%. > The Balance of Trade is in significant deficit. > The Marginal Propensity to Import is 0.5. > The Marginal Propensity to spend is 0.8. > There is presently a Budget Surplus of �2bn. This report will highlight how Government policy could change to try to: * Increase economic growth * Reduce unemployment * Reduce the Balance of Payments deficit * Reduce the inflation to 2.5% We must, however, first take note that there are different approaches to economics. The Keynesian Approach believes that the active use of monetary and fiscal policy can be effective in stabilising the economy. Keynesians tend to focus on a mixture of exogenous rises in consumer demand or excessive fiscal expansion and cost-push factors such as higher wage demands. According to this approach, changes in the national income determine consumption and investment rates; thus, government fiscal spending and tax policies should be used to maintain full output and employment levels. ...read more.

3. Investment in physical capital such as factories, machines, and transportation and communication facilities. 4. Technological change brought about by innovation that introduces new products, new ways of producing existing products, and new forms of business organisation, which would result in increased output. The government needs to provide the framework for the market economy by implementing such things as well defined property rights, law and order, sound money and the basic rights of the individual to locate, sell and invest. The government also needs to provide the infrastructure, such as transportation and communication networks, which are critical to growth in a modern economy. Tax incentives also need to be restructured. Education and health are important forms of expenditure. We need to invest in further trade schools and other appropriate institutions that would boost the consumer wanting education and also improve the delivery of service. Tax incentives or policies can also be introduced to increase the on the job training within firms. Finally, emphasis can be placed on poverty eradication or reduction. Poverty has a negative effect on the growth rate of our economy and creates a drain on the economy. As the country has a Budget Surplus of �2bn, which means the government has �2bn more in revenue than in expenditure, it is consuming less than it spends. This money can thus be used to continue the economic growth and sustainability projects of the country. UNEMPLOYMENT Unemployment is the number of people at working age who are not employed and are actively seeking employment. ...read more.

The process of economic development requires radical structural change. Typically, all economies develop by shifting resources from agricultural & mining to manufacturing and eventually into the tertiary (services) sector. Structural change becomes a 'problem' when the burden of adjustment falls disproportionately on minorities and regions e.g. those with 'outdated' skills that are occupationally or geographically immobile in a given area of our country. The resultant increased income inequality and social exclusion threatens social cohesion. Problems may result from the policy itself, e.g. neglect of agriculture or excessive urbanisation. Some of these problems may be relatively easily overcome while others may be virtually challenging. Some may be tackled immediately while others will only be solved in the long run. Some may be within the country's financial capability while others may be overcome with outside help. The relevant arguments depend on the obstacles that have been identified. The suggestions that were highlighted as it relates to the aforementioned are realistic and feasible as we are operating with a surplus budget, and can be integrated without much change. There would be an addition to the existing system and not a starting over. Adjustability of human resources may not become problematic since it may just be an upgrade. The financial problems would be limited since the changes would stimulate an increase in National Income therefore we invest money to make money. Britain has a unique opportunity to be, once again, a beacon to the world advancing enterprise and fairness together, a dynamic vibrant economy, attaining high levels of growth and employment that would be the best route to prosperity for all. ...read more.