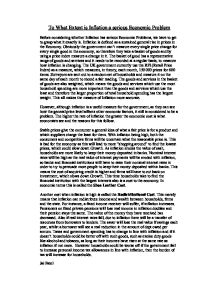 To What Extentis Inflation a serious Economic Problem.

To What Extent is Inflation a serious Economic Problem Before considering whether Inflation has serious Economic Problems, we have to get to grasp what it exactly is. Inflation is defined as a sustained general rise in prices in the Economy. Obviously the government can't measure every single price change for every single good in the economy, so therefore they take a basket of goods and by using a price index measure a change in it. The basket of good has a representative range of goods and services and it needs to be recorded at a regular basis, to measure how inflation is changing. The UK government currently use the RPI (Retail Price Index) as a measure, which measures, in theory, each month, 150 000 prices for 600 items. Surveyors are sent out to a random set of households and measure it on the same day of each month to record a fair reading. The goods and services in the basket of goods are also weighted, which means the goods and services which use the most household spending are more important than the goods and services which use the least and therefore the larger proportion of total household spending has the largest weight. ...read more.

Inflation increases costs of production and creates uncertainty. This lowers the profitability of an investment and makes the company less willing to take the risk associated with any investment project. This again slows down long-term growth and also means less long-term employment as no one is required to use the investment. High inflation hampers long term planning. With all these costs of high inflation it must seem apparently clear that low inflation is what the government want. Yes is the answer, but it doesn't mean that low inflation is perfect. It has costs as well as high inflation. Too low inflation is not only a disincentive for production decision but it can also delay consumer spending in anticipation of further fall in inflation and dampen demand at a time when its revival is critical for triggering the upturn. Low inflation also conveys inflexibility to nominal wages and labour markets, causing higher unemployment and deepening the recession. In a period of falling inflation the ability of firms to make adjustment in real wages is severely constrained and this leads to inefficiency in the allocation of resources and a rise in unemployment. However in general low inflation is good to the economy for the following reasons. ...read more.

When deflation happens workers are going to lose their jobs and wages will be cut. This high unemployment will have to be countered by the government using time and resources. Also as prices have gone down there is less incentive for businesses to produce due to smaller profits, so production will fall and the GDP will fall (Less growth). Inflation doesn't just affect the economy if it is too high or too low; it also affects it if it is not anticipated. Much inflation is unanticipated and households, firms and government are uncertain what the rate of inflation will be in the future. When planning they therefore has to estimate as best they can the expected rate of inflation. To mitigate the effects of inflation the government uses a process called INDEXATION, which allows inflation to be anticipated. This gets rid of some of the costs of inflation however causes some. The indexation builds in cost structures, such as wage increases, which reflect past changes in price. I have looked at a range of aspects involved with inflation and what the costs to the economy are when the scenarios are different, hyperinflation, sustained low inflation etc. and I conclude that inflation will always have some costs if it is both high and low, but higher inflation, which could lead to hyperinflation has more costs to the economy and therefore causes a greater economic problem. Jai Patel ...read more.