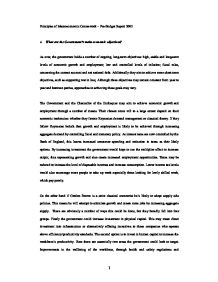 What are the Government's main economic objectives?

Principles of Macroeconomic Coursework - Pre-Budget Report 2003 1. What are the Government's main economic objectives? As ever, the government holds a number of ongoing, long-term objectives: high, stable and long-term levels of economic growth and employment; low and controlled levels of inflation; fiscal rules, concerning the current account and net national debt. Additionally they aim to achieve more short-term objectives, such as supporting war in Iraq. Although these objectives may remain constant from year to year and between parties, approaches to achieving these goals may vary. The Government and the Chancellor of the Exchequer may aim to achieve economic growth and employment through a number of means. Their chosen route will to a large extent depend on their economic tendencies: whether they favour Keynesian demand management or classical theory. If they follow Keynesian beliefs then growth and employment is likely to be achieved through increasing aggregate demand by controlling fiscal and monetary policy. As interest rates are now controlled by the Bank of England, this leaves increased consumer spending and reduction in taxes as their likely options. By increasing investment the government would hope to use the multiplier affect to increase output, thus representing growth and also create increased employment opportunities. ...read more.

To help achieve this there are plans to increase the availability of R&D credit, and also to make available further funds for Higher Education. The hope is these measures will help improve innovation and encourage modernisation within UK industries. Although all these ideas sound beneficial in theory, until exact details of such initiatives are finalised we can be unsure of their likely success. Exactly how many firms will be eligible to benefit from these incentives? Will methods tried and tested in the USA be as attractive to British business mentalities? Reinforcing the governments attempts to promote investment in new start up businesses, they are to offer incentives to local authorities who themselves successfully help promote the creation of new businesses within their region. It was announced local authorities seen to be actively doing so, could collectively be eligible to receive an extra �150 million in 2005, with this amount rising over the following years. This should help to see further growth in the economy, although whether this will result in long term growth remains to be seen. This is likely to depend on the attitudes of the local bodies. ...read more.

However these debt figures are a lot higher than earlier anticipated and may result in tax rises in the future. Tax rises could cause limitations to both growth and employment figures, with disposable incomes falling along with investment levels. In conclusion at face value the policy announcements made in the Pre-Budget report should all help growth and employment levels, and there be little change in inflation. However the extent to which they will benefit these objectives is unclear. In many cases it is how well these measures are implemented that will determine their long term success. Overall the report describes a thriving economy, outperforming all of Britain's major competitors and suggests that these policies can only help improve that situation. In truth the picture may not be so favourable. It must be taken into account that a general election is only 18 months away and the government will be very aware of this. Consequently the costs of these policies may be unclear at this moment in time, especially in terms of possible tax rises. It may well be that the true impact of current policies on the discussed objectives does not become apparent until 2005, after the election. 1 Gordon Brown, Pre-Budget Report 2003 2 Gordon Brown, Pre Budget Report 2003 1 ...read more.