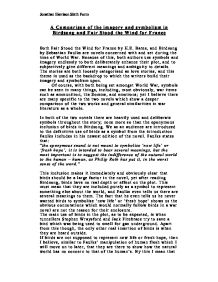 A Comparison of the imagery and symbolism in Birdsong and Fair Stood the Wind for France Both Fair Stood the Wind for France by H.E. Bates, and Birdsong by Sebastian Faulks are novels concerned with and set during the time of World War. Because of this, both authors use symbols and imagery endlessly to both deliberately enhance their plot, and to subjectively give different meanings and ambiguity to details. The stories are both loosely categorised as love stories, and this theme is used as the backdrop to which the writers build their imagery and symbolism upon. Of course, with both being set amongst World War, symbols can be seen in many things, including, most obviously, war items such as ammunition, the Somme, and emotions; yet I believe there are many specific to the two novels which show a deeper comparison of the two works and general similarities in war literature as a whole. In both of the two novels there are heavily used and deliberate symbols throughout the story; none more so than the eponymous inclusion of birds in Birdsong. We as an audience are introduced to the definitive use of birds as a symbol from the introduction Faulks includes in his newest edition of the novel. Faulks states that: "the eponymous sound is not meant to symbolise 'new life' or 'fresh hope'; it is intended to bear several meanings, but the most important is to suggest the indifference of the natural world to the human - human, as Philip Roth has put it, in the worst sense of the word." This inclusion makes it immediately and obviously clear that birds should be a large factor in the novel, yet after reading Birdsong, birds have no real depth or effect on the plot. This must mean that they are included purely as a symbol to represent something else about the world, and Faulks even tells us there are several meanings to them. ...read more.

Again similar to the tearing down of all barricades of a contemporary audience's expectations from a war novel, Sebastian Faulks also follows this tactic of teaching the contemporary audience something about the war which they didn't know before. This is applied in the shape of his tunnellers. "...put something in your poem that people don't know. I felt that if I could bring something new to my account of the war, it would detain even the well-informed, and the story of the tunnellers seemed to fulfil this role." "In the opening section, I wanted the texture of the prose to increase the sense of social and sexual claustrophobia." The first sex scene promotes a claustrophobic and uncomfortable urgency between Isabelle and Stephen, and both the foreplay and love-making are conformed from the ideal that the human body can be used for good, something so often overlooked in many war novels. The graphic imagery of war mind you is something which would also not have been expected in a modern war novel. There are the obvious grim and gory inclusions of arms and legs and flesh being obliterated, and friends seeing other friends' bare flesh on the ground; yet for me the most disturbing passages are those which contend and contemplate on the emotional horror suffered in war. "A direct hit would obliterate all physical evidence that a man had existed... even a contained wound brought greater damage to the tissue than a bullet. Infection or gangrene often followed." "His thin body was rigid and they could see the contortions of his facial muscles beneath the skin. He was screaming for his home." These two passages really epitomise how Faulks tries to write down the sheer horror of war. The first really detailing and conveying the physical harm war has on a human body, from a tongue of researched and unflinching realism. The second shows the affect war has on the human mind. ...read more.

"...the burning heat of the day, all the late summer heat of mid-France". In Birdsong, Faulks never really touches on weather or skyscape specifically, instead tying all natural aspects of the world together to create something of a 'naturalist' or 'realist' novel, where the aim is to highlight the mechanism of human nature and the limits it can be forced to take before nature overwhelms. All in all I believe the imagery in both of these novels is incomparable because of the time they were written, and their consequential information and target audience. Both novels are very loosely classified as love stories, yet their descriptions and symbolism of the war and its consequences are undoubtedly different. Of course Bates has an unfair advantage, he wrote Fair Stood the Wind for France at the time of war, so he was witnessing his imager at the same time as writing it; Faulks on the other hand had to feed his imagination with research, and write for an audience which has very limited knowledge of the true horror of war. The sheer comparison of time is the cause of the consistent differences of imagery. Bates had to write for an audience who were trying to almost ignore the true destruction which was happening around them, and the overwhelming love story is the veneer which camouflages the real horror. Faulks on the other hand, had to write for an audience which is drowned in the typical boy-meets-girl love story, so only pure, unflinching and graphic imagery can be used to truly indicate to a deprived audience what really happened during the war. Contradictorily to the imagery though, the symbolism is relatively similar, with both authors using fairly common literary symbols in their works. This, I believe, is purely due to both authors being extremely traditional in their narrative, and keeping a much stylised technique throughout their respective novels. ?? ?? ?? ?? Jonathan Harrison Sixth Form ...read more.