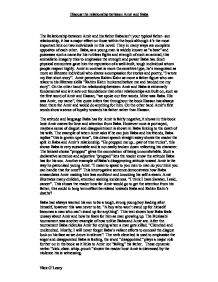 The Relationship between Amir and his father Baba isn't your typical father- son relationship, it has a major effect on those within the book although it's the most important link on two individuals in this novel. They in many ways are complete opposites of each other. Baba, as a young man is widely known as "a bear" and possesses such a name for his ruthless fights and strength of such an animal, this animalistic imagery tries to emphasise the strength and power Baba has. Such physical encounters gave him the reputation of a well-built, tough individual whom people respect highly. Amir in contrast is more the sensitive type, he's recognized as more an illiterate individual who shares a compassion for stories and poetry, "I wrote my first short story". Amir perceives Rahim Kahn as more a father figure who can relate to his illiterate skills "Rahim Kahn hunkered before me and handed me my story". On the other hand the relationship between Amir and Baba is extremely fundamental and is it sets out foundations that other relationships are built on, such as the first word of Amir and Hassan, "we spoke our first words. Mine was Baba. His was Amir, my name", this quote infers that throughout the book Hassan has always been there for Amir and would do anything for him. ...read more.

"Clenched and unclenched. Mostly, I will never forget Baba's valiant efforts to conceal the disgust look on his face as we drove in silence". The verb clenched is used to emphasise the anger and disappointed Baba is feeling, the word "disappointed" plays a major role further on in the book as it links to Amir not "failing" his father. These dynamic verbs: "kick..claw..whip..punch "shows the reader how Amir is distressed by the violence his is witnessing. Another important aspect to this novel is jealousy and how this in many ways brings one relationship closer but separates another. A minor incident would be when Amir and Baba are spending time with each other and Baba asks why isn't Hassan here, Amir says "Hassan had the runs", this shows the reader such a lie directing towards the aspect of Amir being jealous of Hassan. An additional example of how Amir is jealous towards Hassan would be the birthday present Hassan received from Baba. "Hassan hadn't done anything to earn Baba's affections". This once again shows how jealous Amir is of Hassan and how he desires the "affections" of his father. During scene seven of the rape sequence Amir has a decision to save Hassan or leave him. ...read more.

You could argue that the savour of Baba to the young women could be his redemption of his sins in the past, stealing a sons father? However Amir has to redeem himself in a different way perhaps, both these examples contrast each other as they show one individual saving someone but another sacrificing someone. In conclusion I can sum up that both Amir and Baba had their troubles earlier on in the book however nearer the end I felt the connection of a true father-son relationship. "I lifted Baba's blanket. What's this? I said, though as soon as I picked up the leather bound book, I knew". This quote shows how Baba finally accepts Amir for what he is and what he does. This is a very good use of language as it shows the acceptance Baba gives to Amir and that's truly what Amir wanted from him, acceptance. In addition I feel the move to American to some extent makes Baba the "bear" less inferior to what he once was in Afghanistan. Although Amir is a full grown man, he demonstrates how he could never fill his father's shoes and during Baba's funeral he shrinks to his knees and "aspires to cowardice" as he does not know what life will be like without his father. ?? ?? ?? ?? Discuss the relationship between Amir and Baba Nick O'Leary ...read more.