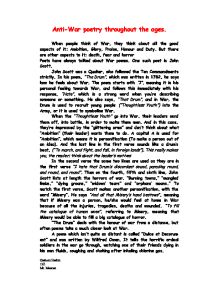 Anti-War poetry throughout the ages.

Anti-War poetry throughout the ages. When people think of War, they think about all the good aspects of it; Ambition, Glory, Praise, Honour and Duty. But there are other aspects to it; death, fear and horror Poets have always talked about War poems. One such poet is John Scott. John Scott was a Quaker, who followed the Ten Commandments strictly. In his poem, "The Drum", which was written in 1782, he says how he feels about War. The poem starts with "I", meaning it is his personal feeling towards War, and follows this immediately with his response, "Hate", which is a strong word when you're describing someone or something. He also says, "That Drum", and in War, the Drum is used to recruit young people ("Thoughtless Youth") into the Army, or it is used to symbolise War. When the "Thoughtless Youth" go into War, their leaders send them off, into battle, in order to make them men. And in this case, they're impressed by the "glittering arms" and don't think about what "Ambition" (their leader) wants them to do. A capital A is used for "Ambition", which means it is personification (To make a person out of an idea). And the last line in the first verse sounds like a drum's beat, ("To march, and fight, and fall, in foreign lands"). ...read more.

It is bitter and powerful in its description of the "Great" war. The second verse starts with a change of tone - panic. "Gas! Gas! Quick, boys!" then the reader gets an adrenaline rush, as the men fumble to put their gas masks on. After all, they may have done it in drills a hundred times before, but this is the real thing. It seems as though everyone has made it "Just in time". However, the next line starts off as we find out that somebody hasn't made it "just in time". So as a reader, we go from being relieved to dread of what happens next. The man who hasn't made it in time inhales the chlorine gas, and a description of him "drowning in a green sea" (of chlorine). Wilfred Owen watches the soldier "dim through the misty panes and thick green light" and also sees him "plunging towards me, guttering, choking, drowning" We can hear him choking in the onomatopoeic "guttering." In the third verse, Owen dreams about the incident "In all my dreams", but is "helpless" as he watches the soldier. The fourth verse is the heart of the poem. It is an answer to all those who think it is a fine and honourable thing to die for one's country ("Dulce et decorum est pro patria mori"). It shows the war is a lack of glory, and full with horror and indignity. ...read more.

They say this because "birds" could possibly be the difference maker in the bomb shelter, by "consuming" the rest of the oxygen. Peter Porter, then lists instructions, likes "Turn off your television now. Turn off your radio immediately". This is there to keep the listener busy and to take their mind off the War. Peter Porter introduces the theme of patriotism and honour at the end of the announcement, when he tells us that "all flags are flying" and that God is on our side. This is the "old Lie" what has come around again. The last line of the poem is chilling, as it tells people to "go quietly to your shelters", People are about to head into almost certain death. Each of these poems deals with the aspect of war, the horrors of war. However, they are all different wars, at different times, but with the same meaning, and that is the "old Lie". "The Drum" deals with the general affects of war, and talks about "thoughtless youth" that are impressed by the "glittering arms". "Dulce et Decorum est" gives a graphic look at what war is like, especially the first world war, giving more details about the horrors of war. "Your Attention Please" doesn't talk about the horrors of war in a great amount of detail, unlike the other two poems. However, overall it is the most sinister poem, of the three. Graham Harkin 12E Mr. Meenan ...read more.