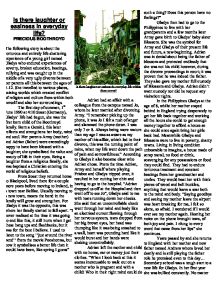 Is there laughter or easiness in everyday life? PRECIOUS BOOTHROYD The following story is about the torturous and entirely life shattering experience of a young girl named Gladys who endured experiences of poverty, broken education, beatings, bullying and was caught up in the middle of a very ugly divorce between her parents all this between the ages of 5-12. She travelled to various places, mixing worlds which created conflict of religion and culture from within both herself and also her surroundings. The first day of summer, 1st June 1990 at 4:10 Soest (Germany), Gladys' life had begun, she was the first born child of the Boothroyd family. Born a Gemini, this later reflects and strengthens her body, mind and soul. Her parents Army (mother) and Adrian (father) were exceedingly happy to have been blessed with a daughter; she symbolized the value and beauty of life in their eyes. Being a daughter from a religious family, she was baptised a Christian entering the world of religious beliefs. From Soest they returned home to Blackpool, lived there for a couple more years before moving to Ireland, in a town near Belfast. Usually moving to a new town, means the bond in the family will grow and strengthen. ...read more.

Who in their right mind could do such a thing? Does this person have no feelings?" Gladys then had to go to the Philippines to live with her grandparents and a few months later Army gave birth to Gladys' baby sister Blossom. She was the symbol for Army and Gladys of their present life and future, a new beginning. Adrian was in denial about being the father of blossom and protested endlessly that she was not his child however, during the divorce proceedings in court; it was proven that he was indeed the father. They also gave my mother full custody of Blossom and Gladys. Adrian didn't want custody nor did he request any visitation rights. In the Philippines Gladys at the age of 8, whilst her mother stayed behind in England trying desperately to get her life back together and working all the hours she could to get enough money together to afford a house so she could once again bring her girls back had. Meanwhile Gladys and Blossom were to live in poverty, shanty towns. Living in living condition unbearable to imagine, a house made of scrap metal, no food or drink, scavenging for any possessions or food they could find. ...read more.

The Dolls: From the left Stephanie, Lisa, Gladys, Naomi and Jade. The B.E.B's: From the left Tina, Gladys, Serena and Rebecca. However, she also had two other worlds at home, the religious world full of commitment to the church and almighty God and also the world of the past, of the things she went through leaving her heart scarred, unhealed and full of holes. Yet she still survives and she finds strength in her faith, her friends and her family that surrounds her. Now she is in college studying law and pulling through life as best she can. "My past was very painful and it still haunts me. But, I know that my song,' "just around the river bend'' was a sign that in time my path would change and the pain of everyday life would become less. It was a new beginning and all the terrible things that had happened to me made me a stronger person, helped to develop my personality and give me my inner strength. If you went through what I did or similar I hope you also found the strength that I found. If you didn't you will soon. The past may bring you to a low ebb as it has me, but what matters most is how you get up each time and strive to move onward and upward with a resounding resilience. ...read more.