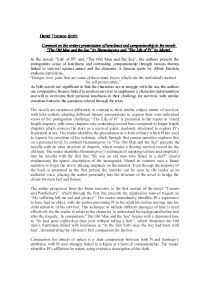 Comment on the writers presentation of loneliness and companionship in the novels The Old Man and the Sea by Hemmingway and The Life of Pi by Martel.

Daniel Thomson-Smith Comment on the writers presentation of loneliness and companionship in the novels "The Old Man and the Sea" by Hemmingway and "The Life of Pi" by Martel. In the novels "Life of Pi" and "The Old Man and the Sea", the authors present the protagonists sense of loneliness and contrasting companionship through various themes linked to survival against nature and the elements. A famous quote by Albert Einstein explores survival as, "Hunger, love, pain, fear are some of those inner forces which rule the individual's instinct for self preservation." As both novels are significant in that the characters are at struggle with the sea, the authors use comparative themes linked to nautical survival to emphasize a characters determination and will to overcome their personal loneliness in their challenge for survival, with similar emotions linked to the quotation echoed through the texts. The novels are structured differently in contrast to their similar subject matter of survival, with both authors adopting different literary presentations to express their own individual views of the protagonists challenge. "The Life of Pi" is presented to the reader in varied length chapters, with some chapters only containing several lines compared to longer length chapters which conveys the story as a survival guide, randomly structured to explore Pi's frustration at sea. ...read more.

The reader recognises conflict in that Manolin's parents "had told him that the old man was now definitely and finally Salao", illustrating the strength of relationship and companionship between both characters. Hemmingway uses "Salao" to establish the Latin American influence and setting of the novella. This is used repeatedly throughout the novel to furthermore establish the culture from which this fishing tale is set. In contrast Pi can be seen to have a strong relationship with his father, with clear admiration in that his father is a zoo keeper, linking his affliction for animals and nature. The zoo is a symbol of freedom for Pi, a place in which his problems could be forgotten as the author uses language to create a place of tranquility, with the reader identifying Pi's personal relationship with the animals as he, "left for school under the benevolent gaze not only of his mother but also of bright -eyed otters and burly American bison and stretching and yawning orang-utans". This conveys a level of friendship with nature, as personification is used to create a sense of youthful observation which echoes Pi's relationship with Richard Parker. ...read more.

Survival as explained in the introduction quotation is an individual's instinct for self preservation, which can be split into several categories. The Old Man and the sea clearly presents the theme of determination, a theme which links the relationship between himself and the boy. Santiago views his challenge for survival with the Marlin as something which he must prove to the boy "I told the boy I was a strange old man...Now is when I must prove it". This represents to the reader that Santiago views his survival as a personal challenge, linked with the boys fascination with the Old man's skill at fishing "And the best fisherman is you...There is no such fish if you are still strong as you say". These quotes clearly illustrate the boy's admiration for the old man, with the old man realising his compassion for the boy as "I wish I had the boy" repeated through the novella places the boy in high regard. In contrast Martel explores survival for Pi as an act of maturation, with Pi using his instinct to overcome seemingly impossible and adverse conditions seen by the reader as a situation which increases his self sufficiency using what his father told him about dangerous animals to ...read more.