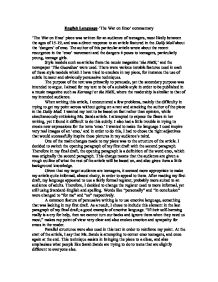 Commentary for AS level English Language

English Language-'The War on Emo' commentary 'The War on Emo' piece was written for an audience of teenagers, most likely between the ages of 15-19, and was a direct response to an article featured in the Daily Mail about the 'dangers' of emo. The author of this particular article wrote about the recent resurgence in the 'emo' movement and the dangers it poses to teenagers, particularly young, teenage girls. Style models such as articles from the music magazine 'the NME,' and the newspaper 'The Guardian' were used. There were various notable features used in each of these style models which I have tried to emulate in my piece, for instance the use of subtle humour and obviously persuasive techniques. The purpose of the text was primarily to persuade, yet the secondary purpose was intended to argue. I aimed for my text to be of a suitable style in order to be published in a music magazine such as Kerrang! ...read more.

Therefore in my final draft, the opening paragraph is a definition of the word emo, which was originally the second paragraph. This change means that the audience are given a rough outline of what the rest of the article will be based on, and also gives them a little background knowledge. Given that my target audience are teenagers, it seemed more appropriate to make my article quite informal, almost chatty, in order to appeal to them. After reading my first draft, my language appeared to use a fairly formal register, probably more suited to an audience of adults. Therefore, I decided to change the register used to more informal, yet still using Standard-English and spelling. Words like "personally" and "in conclusion" were changed to "for me" and "so" respectively. A common feature of persuasive writing is to use emotive language, something that was lacking in my first draft. ...read more.

Sands, something that I have been attempting to do throughout. After reading over my first and second drafts, I noticed that there was a shortage of rhetorical questions and other persuasive techniques such as lists of three. I opted to add a few more rhetorical questions such as "however, where is the evidence to suggest that every single one of those teens wore band t-shirts and skinny black jeans?" This technique forces the reader to think about what I am saying, and coming to the conclusion that it is unreasonable to assume that all emos self-harm. I also added more lists of three because they help to strengthen my point by the use of repetition of a particular idea. "She tells me she is happy, has never even considered self-harming and her 'emo' dress sense seems to be more linked to fashion than depression," is a list of three that highlights the inconsistencies in Sands article, and ultimately persuades the reader to dismiss her article as absurd. ...read more.