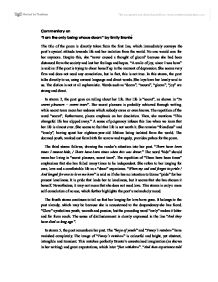 Commentary on &quot;I am the only being whose doom&quot; by Emily Bronte

Commentary on "I am the only being whose doom" by Emily Bronte The title of the poem is directly taken from the first line, which immediately conveys the poet's cynical attitude towards life and her isolation from the world. No one would care for her anymore. Despite this, she "never caused a thought of gloom" because she had been distanced from the society and lost her feelings and hopes. "A smile of joy, since I was born" is said as if the poet is trying to cheer herself up in the moment of depression. She seems very firm and does not need any consolation, but in fact, this is not true. In this stanza, the poet talks directly to us, using earnest language and direct words. She lays bare her lonely soul to us. The diction is not at all euphemistic. Words such as "doom", "mourn", "gloom", "joy" are strong and direct. In stanza 2, the poet goes on telling about her life. Her life is "secret", as shown in "In secret pleasure - secret tears". Her secret pleasure is probably achieved through writing, while secret tears mean her sadness which nobody cares or even knows. ...read more.

In stanza 5, the poet remembers her past. The "hope of youth" and "Fancy's rainbow" have vanished completely. The image of "Fancy's rainbow" is colourful and bright, yet abstract, intangible and transient. This matches perfectly Bronte's unrestrained imagination (as shown in her writing) and great expectations, which later "fast withdrew". "And then experience told me truth / In mortal bosoms never grew." She thinks that truth never exists in her mind because many times she has been deceived by the cruelty of life. The metaphor of "mortal bosoms" lends the poem a deeply pessimistic tone that no moment of life, which she may have cherished, can last forever. The final stanza concludes the whole poem: 'Twas grief to think mankind All hollow, servile, insincere - But worse to trust to my own mind And find the same corruption there. A list of three adjectives with negative meanings (hollow, servile, insincere) is presented in the second line of this stanza, showing her misanthropic attitude. The sibilants in "servile" and "insincere", together with the pauses between the three words, slow down the pace of the final lines of the poem. ...read more.

The rhymes are used to slow down the pace of the poem and make the poet's honest words hover in the reader's mind so we can think carefully and understand her life and feelings better. Bronte wrote the poem in a first person narration, "I am the only being whose doom", to create an effect of realism throughout the poem. By doing so, she is able to effectively portray her past experiences, as the first person form allows the readers to position themselves as herself. The repeated uses of "I" and "my" underline the poem's first person point of view. Bronte also uses emotive language to express the full extent of her depressive feelings, as shown in words like "doom", "mourn", "gloom", "tears", "friendless", "lone", "drear", "died", "grief", "hollow" and "corruption". Moreover, the use of personification ("sad soul", "experience told me truth", "[feelings] have died so long ago", etc.) throughout the poem depicts her state of desolation, and that no other human is present to comfort her during her depressive times. Therefore, she personifies some of her emotions and feelings. Some critics argue that the narrator of this poem is a prototype of Heathcliff in Bronte's masterpiece, Wuthering Heights. However, we must not deny that it has very real emotions and is very well written. ...read more.