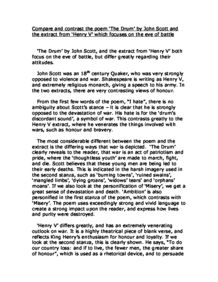 The poem uses exceedingly strong and vivid language to create a strong impact upon the reader, and express how lives and purity were destroyed. 'Henry V' differs greatly, and has an extremely venerating outlook on war. It is a highly theatrical piece of blank verse, and reflects King Henry's enthusiasm for honour and loyalty. If we look at the second stanza, this is clearly shown. He says, "To do our country loss: and if to live, the fewer men, the greater share of honour", which is used as a rhetorical device, and to persuade Westmorland that there will be a greater share of honour if more people die for their country. He also used Christianity to persuade the men to fight, by trying to build up their courage. ...read more.

Nothing positive about war is highlighted in the poem, making the poem seem a lot more realistic than 'Henry V' and a lot more provocative. The first stanza of the poem emphasises the naivety and simplicity of the young men recently recruited to fight, and the loss of their liberty, at the expense of 'glittering arms' and 'tawdry lace'. The second stanza challenges this to the highest degree, by using a lot harsher language and imagery and by saying that the war can easily 'fill the catalogue of human woes'. The poem and the extract differ hugely on their attitudes towards war, Scott having nothing positive to say about the devastation which is caused by war, and King Henry showing his admiration for war and its traits such as bravery, loyalty and honour, having very different impacts on the reader. Both convey extremely differential views on war, and show us the most extreme, contrary opinions. ...read more.