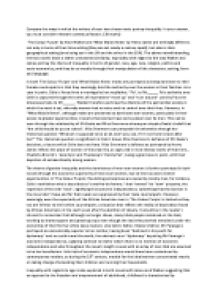 Compare the ways in which The Colour Purple and What Maisie Knew portray inequality. In your answer, you must consider relevant contextual factors. (30 marks)

Transfer-Encoding: chunked ﻿Compare the ways in which the writers of your two chosen texts portray inequality. In your answer, you must consider relevant contextual factors. (30 marks) ?The Colour Purple? by Alice Walker and ?What Maisie Knew? by Henry James are strikingly different, not only in terms of their time setting (they are set nearly a century apart), but also in their geographical setting (one being set in the UK and the other in the USA). The above notwithstanding, the two novels share a rather unmatched similarity, especially with regard to the way Walker and James portray the theme of inequality in terms of gender, race, age, race, religion, politics and socio-economics; and they do so mostly through their manipulation of the characters, setting, form and language. In both ?The Colour Purple? and ?What Maisie Knew? males are portrayed as being dominant to their female counterparts in that they seemingly hold the authority over the women in their families. As a case in point, Celie is forced into a marriage by her stepfather, ?Pa?, to Mr_____. Pa?s authority over Celie is captured through the series of imperatives ?move up? and ?turn around? used by Pa as he showcases Celie to Mr______. ...read more.

nineteenth century, featuring the psychological and moral growth of the protagonist from youth to adulthood with character change being an important part of this process. Although Maisie doesn?t reach the full age of adulthood in James? novel, she is much older than the Maisie we were first introduced to at the beginning of the novel, and just like the character change that is seen in Celie as she grows, Maisie seems to find her voice towards the end of the novel and is described to have ?come out? by Mrs Wix, the metaphor suggesting her empowerment and independence. Maisie is now able to make her own choice regarding who she wants to live with and is no longer subject to adult dominance. Truly Sir Claude?s description that she is ?free? is fitting for the heroine at the end of the novel. However, seemingly, this freedom only comes with age, a clear testimony of that age related inequalities reign supreme in both novels. Apart from gender and age inequality, both novels explore racial inequality, as blacks are presented as inferior to their white counterparts. Sofia, who could be seen to represent black Americans, is brutally punished for ?sussing? the white mayor and is subject to servitude under the mayor?s wife. ...read more.

This however suggests Maisie?s lack of access to political and legal equality as the passive verb suggests that she has no say in her own fate. The19th century Victorian audience would have easily identified with James? depiction of the rule of law in this matter involving Maisie?s parents, given that the Victorian age was characterised by, among other things, more enlightened laws and greater political stability than the rest of Europe. In the same way, the 20th century American audience, would have easily understood Walker?s portrayal of the lack of political and legal equality among the races, largely due to the presence of state sanctioned racism that existed in the Southern states of America in that period. All in all, inequality happens to be a major theme in both the novels ?What Maisie Knew? and ?The Colour Purple?. However, despite the racial, gender, age, economic and political disparities faced by the characters, most of theme emerge triumphant by the end of the novels, a case in point being the main characters of Maisie and Celie who overcome multiple challenges to achieve lucidity. Seemingly there is hope for all the victims of inequality, or so Walker and James would like us to believe. ...read more.