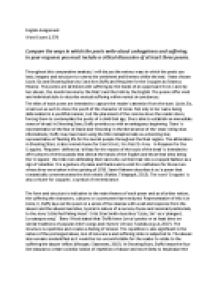 Compare the ways in which Duffy and Heaney write about unhappiness and suffering. In your response you must include a critical discussion of at least three poems.

﻿English Assignment Word Count: 2,576 Compare the ways in which the poets write about unhappiness and suffering. In your response you must include a critical discussion of at least three poems. Throughout this comparative analysis, I will discuss the various ways in which the poets use lexis, imagery and structure to convey the sentiment and themes within the text. I have chosen Lizzie, Six and Shooting Stars by Carol Ann Duffy and Requiem for the Croppies by Seamus Heaney. The poems are all linked with suffering by the hands of an oppressive force. Lizzie by her abuser, the Jewish heroine by the n**i?s and the Irish by the English. The poems offer vivid and individual style to describe mutual suffering within varied circumstances. The titles of each poem are intended to capture the reader?s attention from the start. Lizzie, Six, is laid out as such to show the youth of the character of Lizzie. Not only in her name being abbreviated in a youthful manner, but the placement of the comma slows the reader down, forcing them to contemplate the purity of a child that age. She is able to establish an immediate sense of dread. In Shooting Stars, Duffy provides us with an ambiguous beginning. ?Stars? is representative of the Star of David and ?Shooting? in the literal sense of the ?stars? being shot. Alternatively, Duffy may have been using the title metaphorically as a shooting star, representative of fleeting life for the Jewish people throughout the n**i regime. ...read more.

The effect it has is it to double the meaning and subsequently intensify the horror of the suffering she endured in this situation. Heaney represents the emotional suffering in the form of their love of the country, not necessarily the Irishmen individually but as a whole, due to the oppression from the English ? ?we moved quick and sudden in our own country?. Heaney demonstrates the resentment of the Irish in this sentence and ?the priest lay behind ditches with the tramp? ? Heaney juxtaposes the holiest man with the lowliest man, neither had any advantage over the other when it came to slaughter from their oppressors. The personification Heaney offers upon the Irish defeat on Vinegar Hill ?The Hillside blushed, soaked in our broken wave?; Provokes the emotional and physical in the form of slight embarrassment at their being ill equipped to deter the English attack ?shaking scythes at cannon? but also the physicality or their blood staining the green of the fields to red. The first and last line include the imagery of barley, a symbol for revolution and independence (Morgan, Classnotes, 2015). Heaney uses Irony from the barley that the Irish rebels carried in their pockets for food, was in fact the very same that enabled the barley ?to grow up ?out of the grave? fertilized by the blood of Irish souls. Critic Paul Hurt says that the first line ?The pockets of our greatcoats full of barley? and the last line ?And in August the barley grew up out of the grave? ?are contrived. ...read more.

an All three poems have a common theme of rhyme, but the intention is different. Lizzie, Six and Requiem show tail rhyme and holorime both in an effort to make the poem memorable, but Duffy uses this in Lizzie, Six to exaggerate the loss of innocence of a child. Rhyming the poem in a simplistic child-like manner emphasises the haunting suffering. Whereas Heaney uses this technique to signify the remembrance theme of the poem, taking the literal of making the poem memorable and easy to read. All three poems have a common connection to the suffering imposed from an oppressor. For Lizzie, Six, Lizzie is suffering at the hands of her abuser. For Shooting Stars, the Jewish women and the Jewish race are suffering from the oppression of the Nazis and for Requiem for the Croppies, the Irishmen suffering for the loss of their land to the English. Shooting Stars and Requiem have a sub-theme of remembrance and Lizzie Six, the loss of innocence. Though loss of innocence can be found in Shooting Stars and Requiem, their sufferance is predominantly for a race, and land rather than innocence. Regular assonance and consonance are used throughout all three poems, but to different ends, similarly with intentional use of rhyming. The poems vividly highlight suffering throughout, with careful word choice, simplistic yet vulgar in Lizzie, Six to make the suffering more haunting, Grim and factual in Shooting Stars to exaggerate the horror of the suffering and militant and simple to aid the remembrance of the those who suffered in Requiem for the Croppies. ...read more.