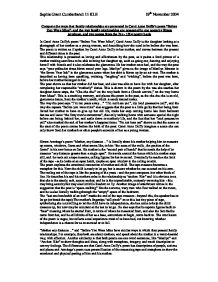 Compare the ways that family relationships are presented in Carol Anne Duffy's poem "Before You Were Mine", and the way family relationships are presented in one poem by Simon Armitage, and two poems from the Pre - 1914 poetry bank In Carol Anne Duffy's poem "Before You Were Mine", Carol Anne Duffy is the daughter looking at a photograph of her mother as a young woman, and describing how she used to be before she was born. The poem is written as if spoken by Carol Anne Duffy to her mother, and moves between the present and different times in the past. This relationship is presented as loving and affectionate by the poet, as it paints a fond picture of a mother making sacrifices to be able to bring her daughter up, such as going out, dancing and enjoying herself with friends and it also celebrates the glamorous life her mother once had, and the way the poet says "your polka-dot dress blows round your legs. Marilyn" gives us the image of Marilyn Monroe in "the Seven Year Itch" in the glamorous scene when her skirt is blown up by an air vent. The mother is described as having been sparkling, waltzing, "laughing" and "winking", before the poet was born, before her mother belonged to her. The poet shows us that her mother did her best, and also was able to have fun with her daughter, after completing her responsible "motherly" duties. ...read more.

He also says that he reports figures back to "base" meaning where he started from, in terms of where he measured from, and also the fact that he came from her, and he still thinks of her as a base, somewhere to begin, come back to. The conclusion of the poem is vague, but reflects a real experience most of us have had, not knowing whether independence is a chance for us to succeed or to fail. "Mother any distance..." and "Before You Were Mine have similar ways in which they present family relationships. For example, they both are about mothers, and speak about the mother in a warm-hearted way, with affection. Another similarity is that both poems use one word sentences, like "Marilyn" and "Anchor. Kite" to show thoughts and ideas, along with metaphors, imagery, and much description to convey feelings. The differences are that Carol Anne Duffy's poem has descriptions of people, actions and places and Armitage's poem uses personification of the measuring tape and metaphors to show the emotional and physical parting of him and his mother. "Song of the old mother" by William Butler Yeats is a simple monologue in rhyme - an old woman describes her daily routine and contrasts it with the easy time that young people have. She gets up at dawn to light the fire, wash, prepare food and sweep up. ...read more.

He sees the boy's life also in terms of a loan, which he has had to repay, after seven years, on the day set for this ("the just day"). This extended metaphor expresses the idea that all people really belong to God and are permitted to spend time in this world. Jonson looks at the contradiction that we "lament" and feel extreme grief and also weep over something we should really envy - escaping the hardships of life and the misery of ageing. The writer suggests that "his best piece of poetry" the best thing he has ever made, that is, is his son. Remembering his sin of loving too much he now expresses the hope or wish that from now on, whatever he loves, he will not love it "too much", for fear of it being taken from him again. This poem is similar to "the song of the old mother" in that both poems have the same rhyme scheme, as every word on the end of each line go in rhyming couplets with the one below. The difference with this poem is that it is a moving poem about grief over a dead beloved son, and the others are reflecting and reminiscent of the characters or the characters day, or something that had been between the two characters. Sophie Grant Cumberbatch 11 KLE 19th November 2004 ...read more.