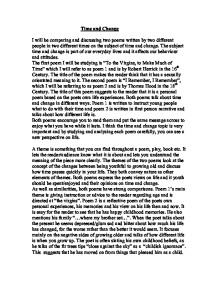 Time and Change I will be comparing and discussing two poems written by two different people in two different times on the subject of time and change. The subject time and change is part of our everyday lives and it affects our behaviour and attitudes. The first poem I will be studying is "To the Virgins, to Make Much of Time" which I will refer to as poem 1 and is by Robert Herrick in the 16th Century. The title of the poem makes the reader think that it has a sexually orientated meaning to it. The second poem is "I Remember, I Remember", which I will be referring to as poem 2 and is by Thomas Hood in the 18th Century. The title of this poem suggests to the reader that it is a personal poem based on the poets own life experiences. Both poems talk about time and change in different ways. Poem 1 is written to instruct young people what to do with their time and poem 2 is written in first person narrative and talks about how different life is. Both poems encourage you to read them and put the same message across to enjoy what you have while it lasts. I think the time and change topic is very important and by studying and analysing each poem carefully, you can see a new perspective on life. A theme is something that you can find throughout a poem, play, book etc. ...read more.

It is in directive and gives the impression that it is a dark reflection of how his life was. He uses personification to describe things that were important to him and enhances the poet's experience for the reader. The poet's constant use of "now" emphasises the fact that the past was better which helps the reader understand more about the changes that had occurred in his lifetime. The use of descriptive language used throughout the poem makes the account more personal and is in strong contrast to poem 1's use of language and the way it is directed at the reader. The poets attention to detail conveys the feeling that when he was younger, he took pleasure in all that was around him and what he feels now is in contrast to the past, which draws the reader in deeper. The differences in the language used in the poems are mainly the way they use words to attract the reader. Poem 1's language is light with straightforward advice and encouragement. Poem 2's language seems dark and in directive drawing the reader in to decipher some of the poet's hidden meanings, e.g. "often wish...borne my breath away" suggests that the poet wishes for death to put an end to his life. The imagery used in the poems enhances our images and the way we see the poems. They both use nature to describe people or important things and talk about how time passes in different styles from the other. ...read more.

I like poem 1 more as it is personal and allows the reader to dive into the poet's life and understand what he describes. Because it is a personal poem, it feels more real, and you can understand it more. It is a reflective poem, comparing the ignorant bliss of childhood, to the maturity of adulthood. I can tell that the poet doesn't like his present much as throughout the poem he dwells on the happy times of his youth. I think the death of his father when he was a young boy may have inspired Thomas Hood to write the poem. Poem 1, I feel, is a little too authoritive. It is always instructing young people what to do with their time and how to spend it, as well as a instructive advice. I feel the poem repeats its message too many times but this helps to put the point of the poem across more strongly for people to underrstand what it is about. I think both poems put the point of time and change across strongly in their own, unique way and it helps people to understand what the actual subject matter means and is trying to demonstrate. The poems are written well and both discuss how ageing affects you. Poem 2 make sme think of my childhood and my most precious memories whereas poem 1 makes me think of my future and what could happen. Both poems have the impact to make you think of the past, present and future and lets you know that all three are different and its down to you as to what you do with your life and time. ...read more.