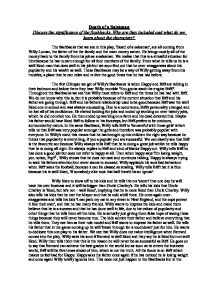 Death of a Salesman Discuss the significance of the flashbacks. Why are they included and what do we learn about the characters?

Death of a Salesman Discuss the significance of the flashbacks. Why are they included and what do we learn about the characters? The flashbacks that we see in this play, 'Death of a salesman', are all coming from Willy Loman, the father of the the family and the main money earner. He brings mostly all of the money back to the family from his job as a salesman. We realise that this is a stressful situation for him because he has to earn enough for all four members of the family. From what he tells us he is a well liked man that does well in his job but we soon find out that he over-exaggerates about his popularity and his wealth as well. These flashbacks may be a way of Willy getting away from his troubles, a place that he can relax and re-live the good times that he has had before. The first Glimpse we get of Willy's flashbacks is when Happy and Biff are talking in their bedroom and below them they hear Willy mumble 'You gonna wash the engine Biff?'. Throughout the flashbacks we see that Willy most refers to Biff and the times he has had with Biff. ...read more.

He tells his kids that Uncle Charley is 'liked, but he's not - well liked', implying that he is more liked than Uncle Charley. Willy also tells his kids that he met the Mayor and that he sold a bill there. He once again over-exaggerates and tells his kids 'I can park my car in any street in New England, and the cops protect it like their own', and that he has many friends. Willy wants to impress his kids and make them believe that he is a success and that he has done well in life, due to his values of popularity and other things that he tells them all the time. He is actually just giving them false hope of seeing these things because they will never become true. The kids admire their father and believe everything that he tells them. They see him as their role model and Biff wants to impress his father as well. He tells his father that in the game coming up he will 'break through for a touchdown' just for him. He wants to dedicate this one play to his father. We see that Willy does not value intelligence when Bernard comes into the play. ...read more.

If someone sees his wife walking around with mended stockings they will relate it to him and he does not want that. This is another chance for us to see Willy's values in life and he keeps on repeating them over and over again. The last flashback that we see in these particular scenes happens whilst Willy and Charley are playing a game of cards. Willy is talking to Ben whilst he is playing cards with Charley and Charley finds it hard to keep up with what Willy is saying. Willy is unwilling to accept help and has a self defence mechanism. Charley is more successful than Willy even though Willy said he was not well liked. Ben has turned up to see Willy's lifestyle, to see his success, or the lack of it. Willy does not want to face up to the truth and everyone around him is hiding him from it. He would really have loved to be like Ben but it has not happened for him. His values have not worked out and we see that he is kind of a failure. Everything that Willy has taught his sons wont help them in life because it has not worked for him. The flashbacks are just a way for him to escape of troubles in the present and go back to a place in the past where he was happy. ...read more.