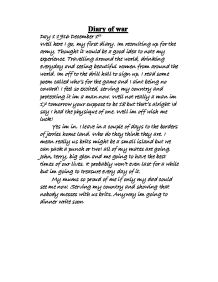 Diary of war Day 1 1916 December 1st Well here I go, my first diary. Im recruiting up for the army. Thought it would be a good idea to note my experience. Travelling around the world, drinking everyday and seeing beautiful women from around the world. Im off to the drill hall to sign up. I read some poem called who's for the game and I aint being no coward! I feel so excited, serving my country and protecting it im a man now. Well not really a man im 17 tomorrow your suppose to be 18 but that's alright Id say I had the physique of one. Well im off wish me luck! Yes im in. I leave in a couple of days to the borders of jerries home land. Who do they think they are. I mean really us brits might be a small island but we can pack a punch or two! all of my mates are going. John, terry, big glen and me going to have the best times of our lives. It probably won't even last for a while but im going to treasure every day of it. My mums so proud of me if only my dad could see me now. Serving my country and showing that nobody messes with us brits. Anyway im going to dinner write soon Day 7 Dear diary I have just finished my basic training. ...read more.

Before it seemed like I was serving my country but now it seems more like suicide for my country. I might not even get to kill anyone dying without an achievement. The fear seemed to be covering me with a dark daunting mist. I could see or breath. Sweat ran down my face like a violent river angered and enraged with a strong wind. Panicking for my life I felt I needed to go. I asked an officer for leave but with a laugh he dismissed me back to my post. Day 19 The battle has finished. Im alive. As I looked around me a saw blood gashing, tears shedding and men shivering with the monstrosity of this violent place. My face was covered in blood as a bullet had ripped past, striking the surface of my skin and like a volcano exploded into a cascade of blood. 1 meaningless inch to the right and I would not have of been sitting here. Shaking from the fear of our next encounter sometimes I wish that gunman had a better aim. Out here there weren't humans but blood thirsty animals with weaponry. The twisted minds of those who blast the bullets against their own species sickens me. When your out there fighting against those who have caused no wrong you don't feel guilt, fear as the adrenalin pumping round the bodies of men powering them to run like a hare and scream like a fog horn, nothing matters but you. ...read more.

see is a load of gods creation, Under all the bravery and heroics, Under all the determination and motivation, Under all the words of lies and tales, All I see is a load of boys skinny and pale. I just wanted people to know that however big or brave someone is there is always something else less on the inside. Day 36 Ive been told to be part of the front offensive I fear the worst as not many people make it back. I gaze up on the parapet wondering how far over or if I will a make. I can feel the adrenalin start to posses my body once again. It doesn't make me feel better though. Its like my mind screams no but my body pleads for it. Stuck between to worlds my mind gives up to the body. This could be my last entry to you diary. I wish to say how much I feared that my mum would outlive me but however it seems I have to face them. I shed a tear which slowly runs down my face not like a raging river but with grace in its movement. I would love to say I had led a happy life but a lie would be sin to end with. At young age of 17 I sign not my diary but my death certificate Signed lovingly Alfred Holmes Ps live your life to the full with ignorance from your country as serving it will serve you death ...read more.