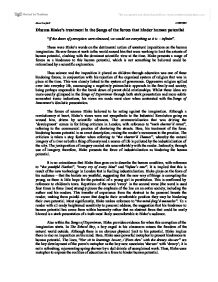 Discuss Blake's treatment in the Songs of the forces that hinder human potential "If the doors of perception were cleansed, we would see everything as it is - infinite". These were Blake's words on the detrimental action of unnatural impositions on the human imagination. He saw forces at work in the world around him that were working to limit the extents of human potential, clashing with the dominant scientific view at the time. Blake presents a range of forces as a hindrance to this human potential, which is not something he believed could be rationalised by a scientific explanation. Thus science and the imposition it placed on children through education was one of these hindering forces, in conjunction with his rejection of the organised system of religion that was in place at the time. This was closely linked to the system of governance. Oppressive religion spilled over into everyday life, encouraging a negatively paternalistic approach to the family and society, being perhaps responsible for the break down of parent child relationships. Whilst these ideas are more usually glimpsed in the Songs of Experience through both stark presentation and more subtle somewhat ironic indications, his views are made most clear when contrasted with the Songs of Innocence's idealistic presentation. The forces of science Blake believed to be acting against the imagination. Although a revolutionary at heart, Blake's views were not sympathetic to the Industrial Revolution going on around him, driven by scientific advances. ...read more.

Although there is an obvious physical limit to his potential, Blake implies there is also an imposition on his mind. Here, Blake uses powerful metaphor to present hindrances to human potential. The lines, "Nor sit in learnings bower, / Worn thro' with the dreary shower" are the key development of the poem's metaphor as the boy now associates 'shower' with 'dreary'; it is not a refreshing, rejuvenating spring shower by a dull drizzle of unexplained work. Thus, Blake uses metaphor to express the realities of education as a force to hinder human potential. Education was one aspect of a repressive system that controlled every aspect of life in Blake's time. Upholding this system was the organised, and compulsory, religion at the time. Blake believed this to hinder human potential; as seen in The Garden of Love. The building of a chapel where a garden was has turned a place of freedom and pleasure into a graveyard. This is a theme seen throughout the Songs, as in The School Boy; the perpetual transition from the freedom of childhood into the restrictive world of the adult, with human potential kept down by the system. This notion is supported be the line, "And Though shalt not, writ over the door". The familiarity of the biblical commandment when presented in a context of forbidding play suggests to Blake's audience that it is, in fact, the religious system that is hindering human potential. ...read more.

In this manner, Blake presents an indignant anger at the absence of the child's parents when he is still of an age when they should be there. The child is thus forced into the world of work and industrialisation, which only hinder the human potential. That there absence is due to the fact "They are both gone up to the church to pray" further presents Blake's frustration at the intrusion of the church into family relationships. The rationale presented by the child for his abandonment: "Because I was happy upon the heath" presents the parents' decision as illogical and distinctly irrational. There is little hope for the potential of a child sold to a chimney sweep, something Blake has made clear by assuming the voice of such a child. In conclusion, Blake presents a scathing indictment of the forces which he saw all around him in his home in London that were working to limit human potential. Blake explores several of these forces in a variety of different manners, from stark presentation to subtle, haunting imagery. At every turn, Blake forces the reader to acknowledge exactly what is going on around them with such indignant questions as those asked in The Chimney Sweeper of experience. However, although it is in this way that Blake explores the forces of evil around him, the Songs are also a source of great joy. His perception, incite and resultant cutting critique of the society around him is placed with a simpler, more pastoral ideal that many believe to be truly, glimpses of heaven. Hazz Scurfield 13/08/2008 ...read more.