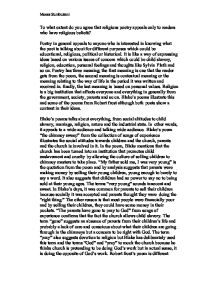 To what extent does religious poetry appeal to readers who hold religious beliefs?

To what extent do you agree that religions poetry appeals only to readers who have religious beliefs? Poetry in general appeals to anyone who is interested in knowing what the poet is talking about for different purposes which could be educational, religious, political or historical. It is like a way of expressing ideas based on various issues of concern which could be child slavery, religion, education, personal feelings and thoughts like Sylvia Plath and so on. Poetry has three meaning; the first meaning is one that the reader gets from the poem, the second meaning is contextual meaning or the meaning relating to the way of life in the period it was written and received in. finally, the last meaning is based on personal values. Religion is a big institution that affects everyone and everything in generally from the government, society, parents and so on. Blake's poems illustrate this and some of the poems from Robert frost although both poets show a contrast in their ideas. Blake's poems talks about everything, from social altitudes to child slavery, marriage, religion, nature and the industrial state. In other words, it appeals to a wide audience and talking wide audience. Blake's poem "the chimney sweep" from the collection of songs of experience illustrates the social attitudes towards children and the church, parents and the church is involved in it. ...read more.

The quotation is a request of enjoyment from the beauty of nature around us and the term "us" may refer to the society or the people with religious beliefs. I agree with Blake we should look up to God for spiritualism and that the church was not a good role model to society at his time but it's not right to mock the church if you think it's not functioning as it should. I totally disagree with the concept of frost that we look up to nature to be right with God because the bible does not say so. "Holy Thursday" a poem from songs of innocence talks about the children's entrance into Saint Paul's cathedral, their innocence and how their singing according to their poem reaches the seats of heaven. The poem starts with the children coming from the charity house heading towards the church with "innocent faces clean" which suggests that they are holy and real children of God. It paints a gorgeous imagery of the church. The children are also described as "flowers of London" which is a reference to the beauty of nature in London. As the poem progresses, we learn that the children are under the authority of elderly men "beneath them seats the aged men" the term beneath is quite an interesting term from my perspective because it could mean that the children are guided by ...read more.

From this point, we get the impression that whoever created the tyger, a powerful, dangerous and fearful creature must be powerful and courageous enough to make such as beast which brings horror to people. The quotation also suggests that Blake does not know the answer to his question because the lines that follow still question the creation of the tyger. There is reference to the black smith as the poem uses the terms such as chain, furnace, and hammer which could be attribute to the industrial world. The poem contains beautiful imagery of the tyger as something which is beautiful and artistic in its creation as suggested by the term "symmetry" but also destructive. The destruction Blake refers to is that of social and spiritual morals which have lead to the suffering of innocent children, and people turning away from God but embracing the industrial revolution which makes them work. Robert frost has a different view of the industrial world from that of Blake because he views people as the wrong minded type and not victim like the way Blake sees them. In conclusion, poetry has a wide audience and therefore should not be limited to one view or readers. As shown from Blake's poems and Robert frost, poetry has many hidden meanings which can appeal to people who not only hold religious beliefs but who also hold a general interest in it. ?? ?? ?? ?? Moses Sumbukeni ...read more.