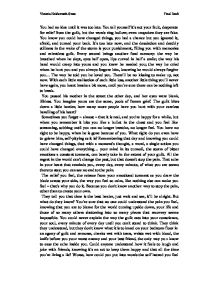 You had no idea until it was too late. You tell yourself it's not your fault, desperate for relief from the guilt, but the words ring hollow; even unspoken they are fake. You know you could have changed things, you had a chance but you ignored it, afraid, and turned your back. It's too late now, and the desolation and deathly stillness in the wake of the storm is your punishment, filling you with memories and relentless guilt. Every second brings another fond memory: the way he breathed when he slept, eyes half open, lips curved in half a smile; the way his hand would creep into yours and you knew he needed you; the way he cried when he hurt you and you always forgave him, knowing he would always forgive you... The way he told you he loved you. There'll be no kissing to make up, not now. With each little realisation of each little loss, another little thing you'll never have again, you heart breaks a bit more, until you're sure there can be nothing left to break. You passed his mother in the street the other day, and her eyes were blank, lifeless. You imagine yours are the same, pools of frozen grief. ...read more.

You broke so many promises, told so many lies... and now you've destroyed the lives of people you could never be worthy of knowing. The sense of worthlessness drives you to it sometimes - some days you cut yourself just to see yourself bleed, to prove to yourself it's not a nightmare, only to wish it were. You know it's become an addiction - no physical addiction, but a deep, consuming need to do it all the same. As much as you want to fight it sometimes, you can't, and it terrifies you. You tell no one, because you are afraid of their judgement, their hatred. You're so alone, just you and your guilt, your consciousness a fragile raft on the raging sea of your emotions... just waiting for someone to throw you a lifeline. So many people live in constant pain, and don't tell anyone they are hurting themselves because they are afraid of how they will be thought of by people who don't understand how a self-harmer feels. It is not always a cry for attention, but the only way that person has to escape their emotional pain. If you know someone who self harms, don't judge them - try to understand. ...read more.

It is entirely in Standard English, although it does use elision in places ("There'll be no kissing to make up..." "...that doesn't stop the pain") which makes it less formal and in a way more accessible for the reader, making it easier for them to be drawn into the piece and understand it. I tried to write my piece so that it bordered between prose and poetry. I felt that this would make it more powerful. Although this technique can make a narrative lack realism, I felt that in the context of my piece it would emphasise the notion of the subject's loss of connection with reality, which is an important part of the message I was attempting to convey. I made some deliberate changes for specific effects between each draft. For example, I changed a section near the end of my second draft, which consisted of many rapid-fire questions, which seemed far too aggressive for the purpose of my piece, which was not to accuse the reader or to put them on the spot, but to make them understand the emotions of the subject. I therefore changed this section, softening the interrogative tone to one that the reader could empathise with more easily. (Word count: 714) Victoria Holdsworth-Swan Final Draft ...read more.