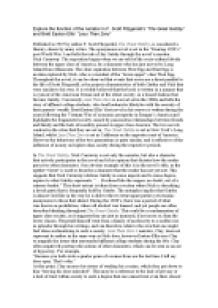 Explore the function of the narrator in F. Scott Fitzgerald's The Great Gatsby

﻿Explore the function of the narrator in F. Scott Fitzgerald?s ?The Great Gatsby? and Brett Easton Ellis? ?Less Than Zero? Published in 1925 by author F. Scott Fitzgerald, The Great Gatsby, is considered a literary classic by many critics. The eponymous novel is set in the ?Roaring 1920?s? post World War 1 and tells the tale of Jay Gatsby through the novel?s narrator, Nick Carraway. The exposition begins when we are told of the socio-cultural divide between the upper class of America, by a character who has just moved to Long Island from Minnesota. The clear separation between West Egg and East Egg is an idea explored by Nick, who is a resident of the ?lower-upper? class West Egg. Throughout the novel, it can be observed that events that occur are a direct parallel to the life of Scott Fitzgerald, as he projects characteristics of both Gatsby and Nick that were similar to his own. It is widely believed that the book is written in a manner that is cynical of the American Dream and of the elitist society, in a biased fashion that favours Gatsby. Conversely, Less Than Zero is a novel set in the 1980s and tells the story of affluent college students, who lead hedonistic lifestyles with the security of their parents? wealth. ...read more.

It understood you just as far as you wanted to be understood, believed in you as you would like to believe in yourself” This quotation epitomizes Nick’s admiration for Gatsby before he has properly met him and implies that he has already formulated an opinion based upon rumours he has heard but also based on the party Gatsby invited him to. Once again, this is may be seen as a condemnation of American society by Fitzgerald who shows that capitalist and superficiality was a major factor in defining an individual. Gatsby’s flawless persona does deteriorate as the novel progresses and as Gatsby comes close to achieving his dream, however Nick appears to glaze over this and as a result, preserves Gatsby’s “greatness” to the reader. The use of the affectation “old sport” throughout Gatsby’s communication with Nick highlights a friendship that is neither formal nor informal but rather one of an illusionary nature. This is to say that Gatsby uses the affectation in order to evoke a more appealing, intellectual persona. Despite Nick seeing through his façade, he chooses to ignore the matter, instead only becomes more infatuated with what Gatsby represents. “What part of the Middle West?’ I inquired casually.’ ‘San Francisco’ ‘I see” It is apparent that Nick knows San Francisco is not in the Middle West but rather on the west coast yet he chooses not to argue as if Gatsby’s word is unequivocally truth. ...read more.

However, in spite of this, Clay does offer himself as a more intellectual individual compared to other characters, by the way he looks at the billboard that is titled “Disappear Here”. Evidently he does not choose to “disappear” and instead stays amongst the morally obsolete society that he is attached to and this ultimately leads to the dénouement in which he is forced to leave his society. Both novels differ in the tone in which they are written though the contexts are very similar despite being in diverse decades. On the one hand, there is Nick who is biased towards one specific character and seems to show disdain for the society that he once strived for, and on the other, Clay, who has a more direct approach to narration and more expressively communicates the plot to the reader. Overall, the two narrators are used to convey to very different ideas that are relevant to their contexts. The Great Gatsby is narrated such that the reader is almost forced into liking Gatsby despite his clear superficiality, which is upheld by trivial objects such as “real books” and medals with “authentic looks”. Less Than Zero poses are more critical view of society, with the narrator becoming confused by the moral ambiguity and generally growing to hate the society that he belongs to as it has been reduced to individualism and by an large a fractured society whereby “people are afraid to merge”. ...read more.