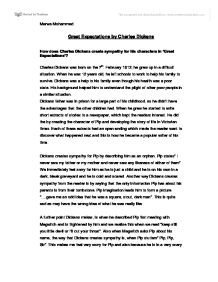 Great Expectations by Charles Dickens How does Charles Dickens create sympathy for his characters in 'Great Expectations'? Charles Dickens was born on the 7th. February 1812; he grew up in a difficult situation. When he was 12 years old, he left schools to work to help his family to survive. Dickens was a help to his family even though his health was a poor state. His background helped him to understand the plight of other poor people in a similar situation. Dickens father was in prison for a large part of his childhood, so he didn't have the advantages that the other children had. When he grew he started to write short extracts of stories to a newspaper, which kept the readers interest. He did the by creating the character of Pip and developing the story of life in Victorian times. Each of these extracts had an open ending which made the reader want to discover what happened next and this is how he became a popular writer of his time. ...read more.

Also when Magwitch asks Pip about his name, the way that Dickens creates sympathy is, when Pip stutters" Pip, Pip, Sir". This makes me feel very sorry for Pip and also because he is in a very scary place, which is the graveyard. I think Dickens uses the graveyard as the scariest possible place, and he wrote about Magwitch as being a very nasty man, an example of the way he speaks is shown" tell us your name" "Quick"!! Pip was a young child who faced Magwitch the" fearful man", with no one to protect him. We do not just feel sorry for Pip being in this place and in this situation, but we feel sorry for him too because he hasn't seen his parents or his five brothers. He lets his imagination create images of his family. During that time, adults died at younger age therefore, there were more orphans, there was not much health care and the people had to pay for it. ...read more.

We read "all in coarse grey, with iron on his leg. A man with no hat and with broken shoes, and with an old rag tied round his head". I think it looks like he has escaped from prison. It might normal behaviour that time only a small number of people had work or job to live from. Magwitch was from the unfortunate group of people who had no job and struggled to exist. I will now start to write my conclusion which is about how Dickens uses a style of writing which makes the reader feel very sorry for Pip, as well as Magwitch. I think Dickens creates sympathy in Magwitch and Pip very convincingly. He himself had survived in this situation, when a poor boy and he had to leave school and work for his family. He knew how to attract the reader by his writing. I think it's really a great story to read, it teaches you how to cope with problems and to tolerate others. ?? ?? ?? ?? Marwa Mohammed ...read more.