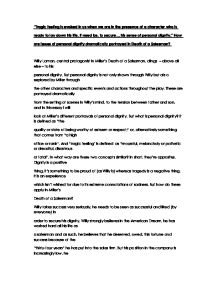 How are issues of personal dignity dramatically portrayed in Death of a Salesman?

"Tragic feeling is evoked in us when we are in the presence of a character who is ready to lay down his life, if need be, to secure... his sense of personal dignity." How are issues of personal dignity dramatically portrayed in Death of a Salesman? Willy Loman, central protagonist in Miller's Death of a Salesman, clings - above all else - to his personal dignity. But personal dignity is not only shown through Willy but also explored by Miller through the other characters and specific events and actions throughout the play. These are portrayed dramatically from the setting of scenes in Willy's mind, to the tension between father and son, and in this essay I will look at Miller's different portrayals of personal dignity. But what is personal dignity? It is defined as "the quality or state of being worthy of esteem or respect;" or, alternatively something that comes from "a high office or rank". And 'tragic feeling' is defined as "mournful, melancholy or pathetic or dreadful, disastrous or fatal". In what way are these two concepts similar? In short, they're opposites. Dignity is a positive thing, it's something to be proud of (as Willy is) whereas tragedy is a negative thing, it is an experience which isn't wished for due to its extreme connotations of sadness. But how do these apply in Miller's Death of a Salesman? ...read more.

Another huge source of Willy's dignity is his boys - in particular, Biff - but Willy perceives Biff to be "spiting" him personally by not making a success of his life. This is because Biff and Willy have (when Biff is older) strongly conflicting views on dignity and its importance. Biff doesn't care for dignity, he doesn't care what other's think, he just believes that "men built like we [Biff & Happy] are should be working out in the open". But this is a great source of anger and shame to Willy. He (despite his obvious talent and love for manual work needing to "get seeds, right away") doesn't view it as a job to be proud of; he believes that as it isn't a very well paid job and money equals success, it isn't a job that carries much dignity with it. Instead of dreaming of fulfilling what he wants to do, Willy dreams of becoming seen as a success to others. As Biff says "he had the wrong dreams. All, all, wrong" - are these dreams of success the wrong ones, bound to failure? Willy is shown to be obviously very talented in manual work, is Miller hinting to the audience that Willy's view of success is all wrong? When Biff was younger, he did care about his personal dignity and people's opinions of him because his success depended on his reputation - "how they used to follow him around in High School". ...read more.

This means he is not only avoiding the undignified old age he would otherwise have had to endure, becoming physically and financially very dependent on others and also of having to admit lack of money or job; no, he sacrifices his life to secure his personal dignity - and at the same time his name has the potential to carry on to success, or at least he thinks. He didn't believe his life was worth living if he was continuously "ringing up a zero". His suicide was not a spontaneous act, it was (albeit in an imaginary conversation with his dead brother) a planned attempt to win back the respect of Biff that he had lost. In conclusion, in Death of a Salesman, personal dignity is shown in many characters and in many ways but, quite naturally, it is shown most prominently in our central protagonist Willy. His needs to be liked and seen as successful, dignified, are the eventual causes of his demise. His stubborn preservation of his personal dignity is almost always the reason for his actions, he didn't follow Ben to Alaska because he was "building something up" in his current job, which would (had it of been the truth) have been a great source of personal dignity, he also continuously accuses Biff of deliberately not doing well in life, "spiting" him by not doing well, and in the end, he chooses death in the hope his funeral will have such huge attendance, it will prove to Biff he was a success, "well liked". ...read more.