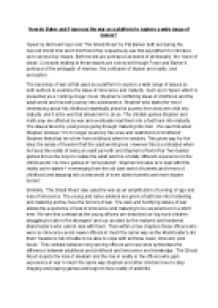 ﻿How do Baker and Frayn use the war as a platform to explore a wide range of issues? 'Spies' by Micheal Frayn and ?The Ghost Road? by Pat Barker both set during the Second World War and First World War respectively use this as platform to introduce us to several key issues. Both novels are portrayed as works of philosophy: the 'novel of ideas'. Concepts relating to these issues are conveyed through Frayn and Barker?s portrayal of the ambiguity of memory, the confusion of illusion and reality, and perception. The backdrop of war is first used as a platform to explore a wide range of issues by both authors to examine the issue of innocence and maturity. Such as in 'Spies' which is presented as a 'coming-of-age' novel: Stephen's conflicting ideas of childhood and the adult world and his own journey into adolescence. Stephen who starts the novel reminiscing about his childhood essentially plots his journey from innocent child into maturity and it is the war that allows him to do so. ...read more.

The young and naïve soldiers are given a fast track into hardening and maturing as they face the horrors of war. The dark and horrifying nature of war allows the experience of loss of innocence and maturing to be experienced in a short time. We see this contrast as the young officers are described as ‘big eyed children, struggling to take in the strangers’ and our avoided by the matured and hardened Manchester’s who cannot deal with them. Then within a few chapters those officers who were so innocence avoid newer officers in much the same way as the Manchester’s did them ‘heads too full of battle to be able to cope with all those clean, innocent, pink faces.’ This contrast between long serving officers and new ones symbolises the difference between adulthood and childhood and innocence and knowledge. ‘The Ghost Road’ depicts the loss of idealism and the rise in reality in the officers who gain experience in war in much the same way Stephen and other children have to stop imaging and playing games and begin to face reality of adult life. ...read more.

The less competent higher class officers (Keith) leading the effective but unadmired lower class soldiers (Stephen). Even more so, war is used to explore class in ?The Ghost Road.? Billy Prior has risen to the officer class from the working class. This way we get to see the perspective of a working class individual seeing how upper class officers mistreat and mismanage the working class soldiers and we see Prior?s disgust at this. ?God, they make me sick.? This clear blunder in the management and leadership in World War One due to the class system deciding positions is used by Barker to show how flawed British culture is and how damaging the upper classes privilege can be exemplified by the deaths caused by upper class leadership sacrificing the lower class soldiers in the First World War. In conclusion both ?The Ghost Road? and ?Spies? use the background of war to present the human condition and the issues all people face whether it be in maturing or in proving themselves. Moreover both novels use the war to examine Britain and it?s culture through the country?s most united time during both World Wars. ...read more.