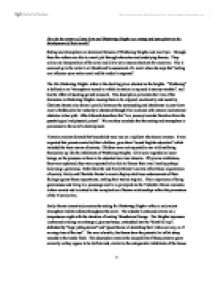 How do the writers of Jane Eyre and Wuthering Heights use setting and atmosphere in the development of their novels?

How do the writers of Jane Eyre and Wuthering Heights use setting and atmosphere in the development of their novels? Setting and atmosphere are dominant features of Wuthering Heights and Jane Eyre. Through them the authors are able to reveal plot through characters and underlying themes. They colour our interpretation of the novel and allow us to assess situations for ourselves. This is summed up in the writer Lori Handleand's assessment of a novel when she says that "setting can influence your entire novel and the reader's response". The title Wuthering Heights refers to the dwelling place situated on the heights. "Wuthering" is defined as an "atmospheric tumult to which its station is exposed in stormy weather", and has the effect of stunting growth around it. This description permeates the lives of the characters in Wuthering Heights causing them to be crippled, emotionally and mentally. Charlotte Bronte also draws a parallel between the surrounding and inhabitants in Jane Eyre. Jane's childhood to her maturity is chartered through five locations with internal and external obstacles in her path. Mike Edwards describes this "as a journey towards liberation from the psychological and physical prison". We can thus conclude that the setting and atmosphere is paramount to the novel's development. Victorian society dictated that households were run on a rigid yet wholesome manner. It was expected that parents controlled their children, gave them "sound English education" which included the basic norms of society. Children were not expected to run wild and bring themselves up like the inhabitants of Wuthering Heights. Girls were regarded as lesser beings, so the pressure on them to be educated was less intrusive. If by some misfortune, they were orphaned, they were expected to be able to finance their own lives by perhaps becoming a governess. Both Charlotte and Emily Bronte's novels reflect these expectations of society. Emily and Charlotte Bronte's novels display rebellious undercurrents of their feelings against these expectations, making their stories atypical. ...read more.

There is no concrete evidence for these guards, and therefore is an assumption of the child's, Jane. This viewpoint leads us to question her interpretation, as the majority of children like Jane possess a vivid imagination which has the potential of perceiving an event inaccurately. As Jane internalises the horror sympathy from the readers is evoked. Bronte's pulsates the room allowing it to act freely. "Out of the surroundings shades rose high and glared white". This aggressive nature seems to intimidate Jane as the room becomes oppressive. Jane concentres on a "certain secret drawer in the wardrobe", which contains a miniature of Mr Reed. By her imagination feeding on loneliness of the macabre settings, her brain swims in "tumult". This miniature makes Jane wonder whether he will return to punish Jane for the burden she has caused upon his wife. The "secret of the room" according to Jane is "the spell which has kept it so lonely despite of its grandeur". This notion of the world controlled by supernatural forces on specific places is echoed in Wuthering Heights and can be used as an explanation as to why such heightened controversy takes place there. The tone of Jane is fearful as she believes the opposition, a "revolted slave" is still "bracing [her] with its bitter vigour". The red room staples itself in Jane's life and is used as a comparison for later events that cause distress. Technical devices and style are features of both writers which help to create setting and atmosphere. Both writers liberally use commas liberally, "I can now conjecture readily that this streak of light was, in all likelihood, a gleam from a lantern carried by someone across the lawn; but then, prepared as my mind was for horror, shaken as my nerves were by agitation, I thought the swift darting beam was a herald was someone coming vision from another world." ...read more.

The gothic features of the novel emerge through the landscape assisted by the exude bodies, and the harsh weather conjuring a tense atmosphere. In contrast, love and passion are also depicted through landscape and expressed through metaphors referring to nature. This talent of both writers is displayed through their ability to convey two major contesting themes, love and hatred, in their full light. Emily Bronte adopts a sophisticated style of writing as the novel is projected from the past encompassing chthonic elements. Jane in Jane Eyre interplays between her internal mediation and the occurrences outside bringing the reader to an equilibrium/understanding of both. It is through her acuity and subjective connotations of words that setting and atmosphere is developed. In the beginning of Wuthering Heights, Lockwood arrives at the conclusion that it is our experiences which makes us assimilate events, via the settings and atmosphere in the ways we do, "it is strange how custom can mould our tastes and ideas: many could not imagine the existence of happiness in a life of such complete exile from the rest of the world". Both, Charlotte and Emily Bronte's manipulation of the language , and the narrative lenses provided within the frames of the novels influences the reader to perceive these novels in a manner that shows it in all it's context of setting and therefore it's marvel. The Bronte's artistically use the vital ingredient of setting which creates atmosphere to enhance their characters makeup, create themes and develop a sustainable plot, being one of the reasons to the success of their novels. The complicated ideals/frames behind their novels has lead these texts to be of the most enigmatic and controversial texts in English literature, with the aid of setting and atmosphere providing a backbone for these achievements. I have to cut it down by 300 words so anything you think isn't helping me get marks please say...also I am unsure as to whether critic quotes should be excluded from the word count. at present moment that are included CTRL PLUS G HELPS FIND WORDS BIOGRAPHY http://www.geocities.com/jenkez2/ http://www.eclectics.com/articles/setting.html ?? ?? ?? ?? 1 ...read more.