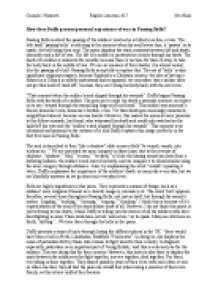 How does Duffy present personal experience of war in Passing Bells?

﻿Chanelle J Nazareth English Literature, 6L7 Mrs Blake How does Duffy present personal experience of war in Passing Bells? Passing Bells is about the passing of the soldiers? soul as he is killed in action, at war. The title itself ?passing bells? is referring to the moment when his soul leaves him, it ?passes? so to speak- the bell being their soul. The poem displays the stark contrasts between life and death, normality and a life of war. The life of a soldier is portrayed so clearly through his death. The death of a soldier is unknown for months, because there is no time for them to stop, to take the body back in the middle of war. We are so unaware of their deaths, it is almost casual, like the passing of a bell- Passing Bells an apt title to capture this. The use of ?bells? is also significant religious imagery, because England is a Christian country, the idea of having a funeral in a Church is widely understood and recognised- we remember that a soldier does not get this kind of ?send off,? because they can?t bring his body back with the survivors. ?That moment when the soldier?s soul slipped through his wounds?. Duffy begins Passing Bells with the death of a soldier. She goes on to make his death a personal moment, as it goes on to say ?seeped through the staunching fingers of his friend?. ...read more.

They are doing this for their country. However, this unity is also there to display the unity between the soldiers as the fight together, survive together, died together. For them, everything is done together. They shared possibly years of their lives with each other at war, so when one dies, they all feel the pain one would feel when losing a member of their own family, as this is how unified they became. When a soldier dies, the people they knew /back home? may not find out for months. For months, they carry on their lives normally, spending most of their time hoping and praying for the best- that their son, father, brother or even friend is alive. Duffy presents their personal experience of this by giving us several scenes of normality to contradict the death of the soldier and show us what is happening at the time of his death: ?rung by a landlord in a sweating, singing pub,? ?an ice-cream van jingling in the park,? ?a songbird fluttering,? ?a parish church chiming out the hour: the ringing end of school?. The reader is able to relate to this, because it is so normal for these things Duffy is describing to be happening. They are scenes we are used to, and personally understand, compared to the stark, harsh image of the soldiers? death given to use at the beginning of the poem. ...read more.

and emotional scene, that this friend will remember this for the rest of his life if he survives long enough to go home. The last three lines of this poem are of great significance, to me: ?in city and in town and countryside ? the crowded late night bus; a child?s bicycle; the old, familiar clanking cow-bells of the cattle.? The last thing the soldier will have seen before his or her death will have been scenes of war, blood, fear, gunfire etc. they will never see scenes of normality again, we are reminded of the fact that they die in such horrible conditions. Never again will they see ?city and in town and countryside? or ?the crowded late night bus; a child?s bicycle?. A powerful piece of imagery is in the final line of the poem: ?the old, familiar clanking cow-bells of the cattle.? As well as more bells imagery, I think it?s important to recognise the significance of Duffy?s use of the word ?cattle?. Cattle are slayed for us every day but we obviously think nothing of it. In the same way, it?s as if she is trying to say the soldiers are killed in such an unforgiving way, their lives snuffed out as suddenly as a member of cattle, such as a cow, and it?s as if she is telling us they die so suddenly that as every moment goes by their deaths become more and more insignificant and, over time we forget. ...read more.