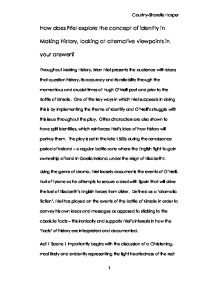 How does Friel explore the concept of identity in Making History, looking at alternative viewpoints in your answer?

How does Friel explore the concept of identity in Making History, looking at alternative viewpoints in your answer? Throughout Making History, Brian Friel presents the audience with ideas that question history, its accuracy and its reliability through the momentous and crucial times of Hugh O'Neill post and prior to the Battle of Kinsale. One of the key ways in which Friel succeeds in doing this is by implementing the theme of Identity and O'Neill's struggle with this issue throughout the play. Other characters are also shown to have split identities, which reinforces Friel's idea of how history will portray them. The play is set in the late 1500s during the renaissance period of Ireland - a regular battle zone where the English fight to gain ownership of land in Gaelic Ireland, under the reign of Elizabeth I. Using the genre of drama, Friel loosely documents the events of O'Neill, Earl of Tyrone as he attempts to secure a deal with Spain that will drive the last of Elizabeth's English forces from Ulster. Defined as a 'dramatic fiction', Friel has played on the events of the Battle of Kinsale in order to convey his own ideas and messages as opposed to sticking to the absolute facts - this ironically and supports Friel's interests in how the 'facts' of history are interpreted and documented. ...read more.

O'Neill's description of Mabel ("talented", "spirited") is very accurate and is how Friel portrays her throughout the play. Mabel is a unique character as she manages to stay neutral to both opposing factions, as a character she represents peace and harmony because of this. Archbishop Lombard is described by the narrator, "By profession he is a church diplomat and his manner is careful and exact." These careful choice of words tell the audience that Lombard is quite a sly character with a good sense of language and means to talk his way out or in to a situation well. He is not likely to be very religious but exploits his profession in order to gain himself an advantage. Lombard decides to write O'Neill's history, and, true to his character, refers to history as a "story" (p. 8), avoiding O'Neill's questions when asked if he will be telling the truth. "Lombard: I'm not sure that 'truth' is a primary ingredient - is that a shocking thing to say?" (p. 8-9) It is clear from this conversation that both O'Neill and Lombard have completely different stances on writing history. ...read more.

But despite the details O'Neill wants included, Lombard will still tell it in a way that is entertaining. Lombard begins to read the history as O'Neill starts to cry and mourn for Mabel, "(O'Neill is now crying. Bring the lights down slowly.)" (p. 71). The slow fade of lights signifies the end of the play. Friel presented identity by portraying a man who had everything, and slowly stripped him of every last meaningful thing he had in order to convey the message of what makes us who we are. O'Neill lost both of his countries, and his wife and baby, the loss of Mabel being pivotal - she was the one person he could relate to and feel close to, and the baby symbolised a new beginning where the English and Irish could live in harmony together. Through Lombard's history we will not learn about O'Neill's duality, his close friend Harry or wife Mabel that helped shape his character, but a Hero who fought a tough battle for Ireland, fled with the Flight of the Earls, and shall be "king for the span of his life" (p. 71), thus telling us that identity exists in many forms. Courtny-Sharelle Harper 1 ...read more.