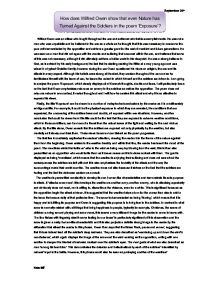 How does Owen show that even Nature has turned against the soldiers in &quot;Exposure&quot;.)

Wilfred Owen was an officer who fought throughout the war and achieved admirable accomplishments. He was not a man who was unpatriotic and he believed in the war as a whole as he thought that this was necessary to overcome the pure evil demonstrated by the opposition and achieve a greater good for the rest of mankind and future generations. He was seen as a man that did not agree with the events and suffering that occurred within the war, and believes that some of this was not necessary, although it did ultimately achieve a better world in his viewpoint. He was a strong believer in God, as is evident by his early background; the fact that he starting reading the Bible at a very young age and was raised in a typical Christian family; however during the war Owen questioned his views on religion, the war and its effects in every aspect. Although his beliefs were strong at the start, they weaken throughout the war and as he familiarises himself with the terror of war, he learns the extent in which himself and the soldiers are driven to. I am going to analyse the poem 'Exposure', which clearly displays all of Owens's thoughts, doubts and fears. ...read more.

It was a constant reminder of the way of life and a reminder that they could never go home it seemed, and they are again captured by the blanket of sadness. Owen uses this effect once more in the poem in relation to the snow. As stated earlier in the essay, snow is supposed to be a happy type of weather that brings joy to most people. However, Owen says in this poem that the air 'shudders' black with snow'. Although on the surface, it is established that the wind is viciously cold and this is emphasised by the fact Owen uses the word 'shudders', it is also noticed that the air is 'black'. The blatant meaning of this phrase is that the war has turned the snow black because of the riots there, however, looking at the phrase from a metaphorical point a view, another perception that could be perceived is that war even drains a completely pure concept; this is highlighted by the fact that the snow is white. It is noticeable that within the poem, Wilfred Owen also allows the weather to change along with the soldiers' thoughts, feeling and deepest hope and dreams. They tend to slip in and out of reality and the weather ultimately changes to represent these thoughts in their own wandering minds. ...read more.

Alliteration and some sibilance techniques also add to discovering the key phrases, e.g. 'streak the silence', 'field, or fruit'. In conclusion to this exploration of Wilfred Owens's poem 'Exposure', I have looked at various aspects of the poem relating to the theme of nature, and also how and why this link is connected. In my opinion, Owen clearly states his point of view and the other soldiers' throughout the natures input and use this as another aspect of the war to think about that wouldn't at first come to mind when readers hear about the war initially. He also tries to show other sides of the war that wouldn't have been revealed before, and discusses how everyone had similar thoughts and feelings to him as he relates to them almost as a unity. He always describes the events as 'we'. I believe that altogether this poem reflects, in more than one way, how the war was harsh and the effects that this had on the groups of soldiers' there. I think that the poem does this effectively, as described beforehand and would overall say that the war was an awful place to be, which obviously deludes the soldiers so much so that there is a fine line between the sane and the insane. ?? ?? ?? ?? September 29th Kate Iliff ...read more.