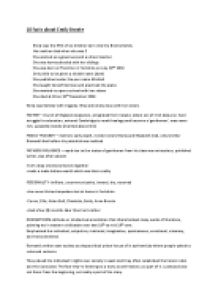 How is &quot;Wuthering Heights &quot; a Gothic Novel?

﻿10 facts about Emily Bronte Emily was the fifth of six children born into the Bronte family Her mother died when she was 2 She worked as a governess and a school teacher She was homeschooled with her siblings She was born at Thornton in Yorkshire on July 30th 1818 Only child to be given a middle name (Jane) She published under the pen name Ellis Bell She taught herself German and practised the piano She wanted to open a school with her sisters She died at 30 on 19th December 1948 Emily was familiar with tragedy. Was extremely close with her sisters. FATHER ? church of England clergymen, emigrated from Ireland, oldest son of Irish labourer, hard struggle for education, entered Cambridge to read theology and become a ?gentlemen?, was never rich, upwardly mobile (married above him) FAMILY TRAGEDY ? mothers early death, 2 older sisters Maria and Elizabeth died, only brother Branwell died before his potential was realised FATHERS INFLUENCE ? rapid rise to the status of gentlemen from his class was miraculous, published writer, was often absent -form deep emotional bonds together -made a make believe world which was their reality PERSONALITY- brilliant, uncommunicative, inward, shy, reserved -she never thrived anywhere but at home in Yorkshire -Currer, Ellis, Acton Bell, Charlotte, Emily, Anne Bronte -died a few (5) ...read more.

SHOULD BE SYMPATHETIC ?INQUIRED FOR ITS OWNER? ALIGNED WITH THE FAMILY ?CATHY, TOO MISHCHEVIOUS AND WAYWARD FOR A FAVOURITE? MAKES OBSERVATIONS ON THE FAMILY, ALWAYS THERE Cathy in chapter 8. ? not governed by rules of sophistication ?I own I did not like, after her infancy was past; ?I vexed her frequently by trying to bring down her arrogance? pg 66 ?led her to adopt a double?.deceive anyone? pg 67 ?she did turn out a haughty, headstrong creature? pg 66 ?she had a wondrous constancy to old attachments? pg 66 ?you?ve combed my hair?let me alone? pg 70 ?she stamped her foot?compelled by the naughty?with water? pg 71 ?little Hareton?sobbed out?wicked aunt cathy, she seized?child livid? pg 71-2 ?demanded? ?persisted? ?you?ve made me afraid and ashamed of you? EDGAR pg 72 Edgar chapter 8 ?astonished young man? pg 72 ? different upbringings ?mr edgar seldom ?heights openly? pg 67 ? weak ?pale and with a ?lip? pg 72 ? sheltered life, like hareton ?the soft thing? pg 72-pathetic, weak at the hands of Cathy SYMPATHISE WITH NELLY ? TRUST HER JUDGEMENT MORE AS A NARRATOR Heathcliff chapter 8 ?as if the lad?period? pg 66 ?became daily?ferocity? pg 66 ? cathy civilises him, becoming ...read more.

Weather and dangerous moors surrounding WH combine to create a truly Gothic setting. Gothic novels include grotesque imagery, dark and foreboding mansions and landscapes, chaos, pain and doomed love, all themes present in Brontes work. Villain ? complex and interesting. Heathcliff is the personification of the estate in the sense that he is wild and strong and he is in many ways a archetypal gothic character in that he is mysterious, brooding, dark and dangerous. Like gothic villains or in many cases the antagonists ? Heathcliff is bent on vengeance and doesn?t care who must suffer from his cruelty in order for him to achieve it. He is a man made of experiences and in this way Heathcliff is a prime example of a Gothic protagonist. Bronte makes perfect use of gothic elements in evoking within the readers mind a powerful sense of dread ? a chilling of the spine and a curdling of the blood. All the barbarity of gothic novels come from association with the medieval and middle ages, in a sense of their wild, bloody and barbarous views on justice and revenge. As far as all the main key points that a gothic novel is required to include goes, WH follows the guiding principle almost to the letter. Therefore, the opening chapters = typical of a gothic novel. ...read more.