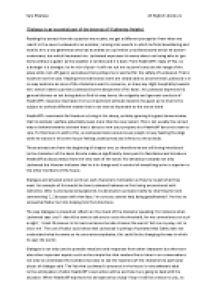 ﻿Sara Elkateep AS English Literature ?Dialogue is an essential part of the interest of Wuthering Heights? Reading the extract from the question we receive, we get a different perception from when we read it in the novel. Lockwood is an outsider, coming into a world in which he finds bewildering and hostile, he?s a city gentleman who has stumbled on a primitive uncivilised world which he doesn?t understand, but which fascinates him. Lockwood expresses his worry about not being able to ?get home without a guide? as the weather is terrible and it is dark. From Heathcliff?s reply of ?No, no a stranger is a stranger, be he rich of poor- it will not suit me to permit any one the range of the place while I am off guard, we believe that perhaps he is worried for the safety of Lockwood. That is however not the case. Reading the small extract were are clearly able to observe that Lockwood is in no way welcome as none of the characters want to converse, or show any slight hospitality towards him, which indeed surprises Lockwood by the abruptness of his hosts. ...read more.

He tries to somewhat flatter her into helping him find directions. The way dialogue is presented reflects on the mood of the character speaking. For instance when Lockwood says ?you! I should be sorry to ask you to cross the threshold, for my convenience on such a night?, I cried. Moreover in his next sentences he also stresses the words ?tell me my way, not to show me?. The use of italics could show that Lockwood is perhaps frustrated that Cathy does not understand what he wants so he uses extra emphasise, this could be by changing the way in which he says the words Dialogue is not only used to provoke reactions and responses from other characters but there are also other important aspects such as the simple fact that readers like to listen in on conversations not only to understand the narrative but also to see the reactions of the characters to particular pieces of dialogue said. The fact that Lockwood?s presence in the house is very awkward adds to the anticipation of what Heathcliff?s next action will be and how he is going to deal with the situation. ...read more.

Through the dialect of joseph Bronte provides a remarkably accurate rendition of Yorkshire dialect Another important quote that is said by Cathy is ?I?ll have you modelled in wax and clay? Catherine is proposing to make an effigy of Joseph for the purpose of punishing him through witchcraft. By saying that is provokes a reaction from joseph as he exist the room in ?horror?. Bronte describes Cathy as being a witch with beautiful eyes, somewhat enchanting and bewitching furthermore this emphasises the ?spell? she recites ??I?ll not say what he shall be done to- but, you?ll see! Go, I?m looking at you! Bronte?s play on words uses Cathy?s eyes to express that she does not particularly use witchcraft to manipulate people, but only her beauty and charisma to enrapture them. In conclusion Dialogue is a very important and essential aspect of all literature. If Dialogue was not present in literature then stories and novels will be uninteresting as there is no true insight in the characters thoughts. Dialogue is a vital element to give the reader needed information about the plot and characters. ...read more.