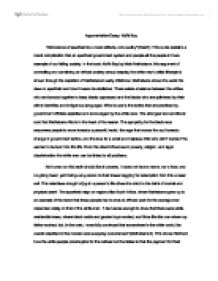 Argumentative Essay: Kaffir Boy "Abhorrence of apartheid is a moral attitude, not a policy" (Heath). This quote explains a moral complication that an apartheid government system and people all the people in it are example of our failing society. In the book, Kaffir Boy by Mark Mathabane, this argument of controlling and containing an ethical society versus keeping the white man's elitist lifestyle is shown through the depiction of Mathabane's early childhood. Mathabane shows the world his view on apartheid and how it needs be abolished. There exists a balance between the whites who are banded together to keep blacks oppressed and the blacks who are splintered by their ethnic identities and indigenous languages. What is sad is the tactics that are practiced by government officials exploited and encouraged by the white race. The strongest and emotional cord that Mathabane hits is in the heart of the reader. The sympathy for the black race empowers people to move towards a peaceful world, the rage that moves the soul towards change in government tactics, and the love for a small and helpless child who didn't decide if he wanted to be born into this life. From the direct influences in poverty, religion, and legal discrimination the white man can be linked to all problems. No human on this earth should live in poverty. ...read more.

With the so called benefits of the white race in providing jobs and security to their once isolated and barbaric tribal oppressed, the natives relieve some of their trust and security that they have left to these white people. Not knowing that, really what got them in this truly hardening situation is the one who you think is helping. Well, in benefiting, they mean forcing someone into a life style that the whites see as fit. That's why when Mathabane described the influence of forced religion on their region, it pointed to me another point where the whites are pushing or molding the pre-established natives into a society that they want them to live. "At that a Zulu woman in tribal garb stood up and shouted: "We don't need Christianity. We have our religions of a thousand years. We don't need to worship a white man's god when we have our own." (Mathabane 29). This shows that the natives see the influences that the whites try to bring into their society. They are scared that more of the tribal followers will fall into the trap of these in their minds "False Gods". This is where the apartheid affects the people's daily life. The way they live and what they do every day is being set for them and they have no power to get out of this death cycle of lies and manipulation. ...read more.

This whole novel's underlying meaning of showing the world outside of South Africa the extent of suffering of human being and the treatment that isn't appropriate for a dead animal. The extent of apartheid on any society will result in the above feelings and emotion in whatever form. Race was the most important aspect of individual identity in apartheid South Africa. Yet it, due to its apartheid settling, determined where you lived, who you married, and what kinds of education, job, and housing was available to you. With this balance between the Whites and the blacks, there only the white came out on top where as they were systematically oppressed at every turn; their lives were controlled by an unsympathetic government that saw them as inferior beings. The majority of social, legal, educational, political, and religious organizations worked to keep the apartheid system in place and to prevent blacks from escaping poverty and ignorance and gaining a position of equality with whites. Under apartheid, whites banded together to keep blacks oppressed, while blacks were splintered by their ethnic identities and indigenous languages, a practice that government officials exploited and encouraged. For some history review, it wasn't until the Soweto school riots in 1976 when blacks began to unite on a wide scale and fight against their common oppressor, the white race. Why the people of this earth must undergo THIS is beyond myself and individuals around me. As a group, this evil can be stamped out like the thousands of lives it has already taken. ?? ?? ?? ?? ...read more.