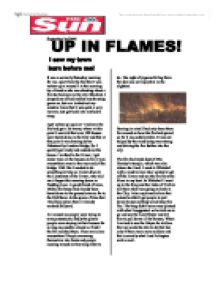 September 3rd 1666 It was a normally Saturday morning for me, apart from the fact that I was woken up at around 3 in the morning by a friend as she was shouting about a fire she had seen in the city. Shocked, I jumped out of bed and but my dressing gown on, but as a looked out my window I saw that it was quite a way away so just got back into my bed to sleep. I got woken up again at 7 and saw the fire had got a lot worse, where at this point I was told that over 300 houses were burnt down in the City and that at this point it was burning down Fishstreet by London Bridge. So I quickly got ready and rushed out the house. I walked to the Tower, I got closer I see all the houses on fire it was everywhere even to the very end of the bridge. ...read more.

I went to Whitehall with a random man who wanted to get off the Tower and see the fire from the River in my boat. In Whitehall I went up to the King and the Duke of York to tell them what was going on back in the City, I also explained to him that unless he didn't get people to pull down houses nothing would stop this fire. The king didn't seem very pleased with what I suggested, so he told me to go and see the Lord Mayor and tell him to pull down all the houses. When I arrived to see the Mayor he told me that we would be able to do that but only if there were more soldiers and this is exactly what Lord Arlington said as well. I then went to Watling Street where I walked along the path but people were rushing past me carrying everything they could, packing them in carts. I met the Mayor in the middle of all this rush looking very startled shouting to me almost like a frantic woman "What can I do? ...read more.

I had slight hopes that something could be done about this fire near Three Cranes but we would have to be very careful. As I looked around the river it was so weird seeing it packed with people and boats full off all their things. I had seem enough and went again to Whitehall and there I walked to St. James's Park and met my wife and Creed, Wood and his wife we all walked to my boat where the fire was so close now to the water. The smoke was so thick that it covered our faces and it was hard to breath. What looked like firedrops and flakes of fire were just burning the home of all these people it was so distressing to watch. We couldn't take much more of what was going on, on the river so we stayed at a small house on the bank side over against the near the Three Cranes where we watched the fire grow even more. This incident would change London forever. By Katherine Trott ...read more.