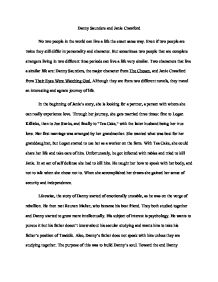 Danny Saunders and Janie Crawford No two people in the world can live a life the exact same way. Even if two people are twins they still differ in personality and character. But sometimes two people that are complete strangers living in two different time periods can live a life very similar. Two characters that live a similar life are: Danny Saunders, the major character from The Chosen, and Janie Crawford from Their Eyes Were Watching God. Although they are from two different novels, they travel an interesting and agnate journey of life. In the beginning of Janie's story, she is looking for a partner, a person with whom she can really experience love. ...read more.

Unfortunately, he got infected with rabies and tried to kill Janie. In an act of self defense she had to kill him. He taught her how to speak with her body, and not to talk when she chose not to. When she accomplished her dream she gained her sense of security and independence. Likewise, the story of Danny started of emotionally unstable, as he was on the verge of rebellion. He then met Reuven Malter, who became his best friend. They both studied together and Danny started to grow more intellectually. His subject of interest is psychology. He wants to pursue it but his father doesn't know about his secular studying and wants him to take his father's position of Tzaddik. ...read more.

Although the two characters lived very different lives, many similarities can be seen between them. They both experienced emotional and spiritual growth. Danny wanted to purse his study of psychology in the University of Columbia, but his father wouldn't let him as he was suppose to take his position as a Tzaddik. In the end, his father gives his permission to go to the University to study psychology and is relieved of the burden of silence between them. And just like Danny, Janie was seeking to find a spiritual enlightenment and a strong sense of her own identity and she accomplished her goal. With all of that said and done, any goal or dream is possible to achieve if people put their minds to it. ?? ?? ?? ?? ...read more.