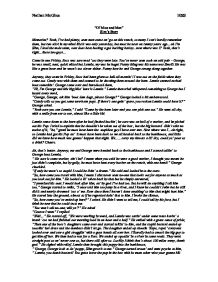 "Of Mice and Men" Slim's Story Memories? Yeah, I've had plenty, seen men come an' go on this ranch, so many I can't hardly remember them, but two stick in my mind like it was only yesterday, but must be near on twenty years ago...oh I'm Slim, I lead the mule team, sure does beat busting a gut bucking barley...now where was I? Yeah, that's right...these two guys... Came in one Friday, Boss was sure mad 'cos they were late. You've never seen such an odd pair - George, he was small, neat, quick witted but Lennie, my was he huge! Funny thing was his name was Small! He was like a great bear and he wasn't too clever either. Funny how he and George strung along together. Anyway, they come in Friday, Boss had been given us hell all mornin'! I was out on the fields when they came out. Candy was with them and seemed to be showing them around the barn. Lennie seemed excited bout somethin'. George came over and introduced them, "Hi, I'm George and this big fella' here is Lennie." ...read more.

He came in with his dog, which wouldn't be so bad, but the old thing stank. Carlson, one of the buckers, offered Candy an option, "You should shoot that old dog, Candy. I mean he's no good to any of us." Candy looked at his dog, "I couldn't shoot him," Candy said, "I've had him since he was a pup" "Why don't I shoot him then?" Carlson asked, "Ye, I'll take him out to the forest and jus' shoot him in the back of his head. He won't feel a thing, I swear. Your probably puttin' him through more torture keepin' him alive than shootin' him." A tear was wellin' up in Candy. This pup was his only friend. Candy relented and Carlson took the dog and you then heard a shot in the distance. We all looked at Candy, he was starin' at the wall. I offered him a new puppy but he didn't answer. Crooks, the 'niggah' entered and told me tha' Lennie was messin' with the pups. George looked at me and told me to kick him out if he's causin' trouble. ...read more.

We ended up near this river and George said he'll go in alone. I stood by some trees an' saw everythin' that happened. George went up to Lennie, pulled out Carlson's luger and told Lennie to look out toward the horizon. Lennie was smiling' talkin' to himself I think, George looked hesitant but found som' courage and pulled the trigger. Lennie fell down the bank, and jus' lay there. George walked over and didn't look to good. Curley and Carlson came over, makin' up som' story to tell the others. But I knew that George didn't wanna' have to shoot Lennie, so I went and had a chat wit' him. I simply said, "It had to be done." He looked at me, and seemed glad that someone had said that to him, but still looked troubled. We got back to the ranch an' everyone wanted to know what happened. Carlson was leading the story, and half of weren't even real. The next couple o' days was hard on George. He seemed to be in a completely different world, starin' into space. He did get over it though, took him a couple o' weeks, and he turned back to the ol' George. God, that weekend was the longest weekend I have ever had. ?? ?? ?? ?? Nathan McGhee 10SS ...read more.