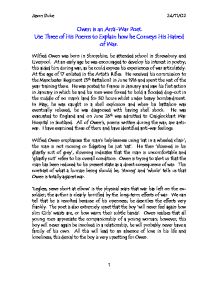 Owen is an Anti-War Poet. Use Three of His Poems to Explain how he Conveys His Hatred of War.

Owen is an Anti-War Poet. Use Three of His Poems to Explain how he Conveys His Hatred of War. Wilfred Owen was born in Shropshire; he attended school in Shrewsbury and Liverpool. At an early age he was encouraged to develop his interest in poetry; this aided him during war, as he could express his experiences of war articulately. At the age of 17 enlisted in the Artist's Rifles. He received his commission to the Manchester Regiment (5th Battalion) in June 1916 and spent the rest of the year training there. He was posted to France in January and saw his first action in January in which he and his men were forced to hold a flooded dug-out in the middle of no man's land for 50 hours whilst under heavy bombardment. In May, he was caught in a shell explosion and when his battalion was eventually relieved, he was diagnosed with having shell shock. He was evacuated to England and on June 26th was admitted to Craiglockhart War Hospital in Scotland. All of Owen's, poems written during the war, are anti-war. I have examined three of them and have identified anti-war feelings. Wilfred Owen emphasises the man's helplessness using 'sat in a wheeled chair'; the man is not moving or fidgeting he just 'sat'. He then 'shivered in his ghastly suit of grey', shivering indicates that the man is uncomfortable and 'ghastly suit' refers to his overall condition. Owen is trying to alert us that the man has been reduced to his present state as a direct consequence of war. ...read more.

it makes him sound so pathetic and helpless. 'Why don't they come' conveys the boy's vulnerability, if he needs someone else to perform the simplest of tasks then what chance does he have of defending himself? Readers then remember that war brought about this dependency. He feels very sorry for this man. This is apparent due to the constant repetition of 'why don't they come?', which sounds like a cry of help, yet the nurses still ignore him. As Owen realises that war has disabled the man, his sympathy turns into hatred channelled towards war. A second poem which shows that Owen is anti-war is 'Dulce et Decorum est'. Clear proof of his dismay is seen in 'Bent double like old beggars under sacks, knock-kneed coughing like hags'; his description is allegedly of soldiers the best of the country, yet he calls them 'old hags'. The author is dismayed by the fact that war conditions have allowed soldiers to be turned into 'beggars' and 'hags'. This image of soldiers destroyed by war is similar to the victim in disabled; both reveal the physical effects of war. Readers can clearly see that the men lack essential equipment, 'many lost their boots', and it would be foolhardy to think them fighting fit. Because he shows obvious disapproval of the characteristics of war, hard conditions, fire gas, explosions, he must also be against the whole of warfare. He mirrors concern, raised in 'Disabled' about the usage of men in war. This idea becomes apparent in 'towards our distant rest'; the word 'distant' raises concern as it implies that soldiers are worked too long and hard. ...read more.

All these factors help illustrate Owen's hatred towards the monotony of war and the fact that it is absolutely pointless. The affects of war also make the soldiers question their belief in God due to their dispiriting experiences of inhumane slaughter. The author is definitely disgusted by the fact that while 'pale flakes with fingering stealth come' all the soldiers can do is 'cringe in holes' like animals. In 'Dulce et Decorum est' and 'Exposure' the soldiers have not had the opportunity to die fighting. It is sad to know that this is their only defence; otherwise they would employ other methods. Owen shows revulsion towards the futility of war. The soldiers die for no reason at all and they achieve nothing. The futility of war is a chronic theme in all three poems, 'Disabled' examines a man who has lost his legs for no reason, 'Dulce et Decroum est' views the soldiers dying due to gas and 'Exposure' sees men drop because of the weather. 'Exposure' is more a poem full of psychological pain, it shows the soldiers' inactivity quite like the 'Disabled: victim of war'. The poem really does strip war to its bare bones; joined with 'Dulce et Decorum est' it would be an excellent deterrent of war. From the three poems examined we can tell Owen is against war. The poet is angry that so much time, energy and resources have been spent on war, all of that could have been spent on saving lives. Owen finds the tearing apart of families, destruction of a person physically and mentally despicable. The poet regards the weapons created for killing, in war, monstrous. All the above should prove without doubt that Owen is an anti-war poet. Jason Duke 24/11/02 1 ...read more.