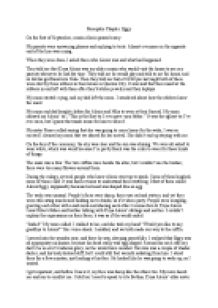 Persepolis Chapter: Eggy On the first of September, cousin Alexis passed away.

﻿Persepolis Chapter: Eggy On the first of September, cousin Alexis passed away. My parents were answering phones and replying to texts. Almost everyone on the opposite end of the line was crying. When they were done, I asked them who Alexis was and what had happened. They told me that Kuya Alexis was my older cousin who would visit the house to see my parents whenever he had the time. They told me he would play and talk to me for hours, and so did his girlfriend Ate Nika. Then they told me that at 10:00 pm last night both of them were shot by three robbers in their house in Quezon City. It was said that their maid let the robbers in and left with them after they?d stolen jewelry and their laptops. My mom started crying, and my dad left the room. ...read more.

Some of them laughed, some of them cried. It was hard at times to understand their stuttering. Most of them called Alexis Eggy, supposedly because his head was shaped like an egg. The wake was unusual. People?s faces were damp, their eyes red and watery, and yet they were still eating snacks and holding on to drinks, as if it was a party. People were mingling, greeting each other with a sad smile and sharing each other?s connection to Kuya Alexis. I saw Nika?s father and brother talking with Kuya Alexis? siblings and mother. I couldn?t explain the expressions on their faces; it was as if the world ended. ?Isabel!? My mom called. I walked to her, and she took my hand ?Would you like to say goodbye to Alexis?? Her voice shook. I nodded, and we both made our way to the coffin. ...read more.

Kuya Alexis and Ate Nika where talking to Dad and Mom after dinner. I sat beside Kuya Alexis. He asked me how ballet was and I told him that I wanted to quit. I told him that my classmates keep telling me I should get a life because I can never join them on weekends. I can never go to parties or hang out with them. It?s just school and ballet, school and ballet. Then Kuya Alexis asked me, ?Do you love ballet?? And I said yes. Then he said to me, ?Then keep on doing it no matter what anyone tells you. I just wanted to tell you that I?m still in ballet because of him.? She started crying, but she smiled at me and said ?Thank you.? I realized that my white blouse was drenched. When we walked out the church, I looked up and saw that the sky was black. A few seconds later, it started raining. ...read more.