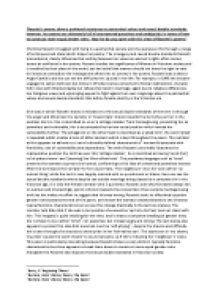 Rossettis poems show a profound resistance to patriarchal values and sexual double standards, however, her poems are ultimately full of unanswered questions and ambiguities in terms of how to construct more equal gender roles. How far do you agree with this view of Rossettis poetry?

﻿?Rossetti?s poems show a profound resistance to patriarchal values and sexual double standards, however, her poems are ultimately full of unanswered questions and ambiguities in terms of how to construct more equal gender roles.? How far do you agree with this view of Rossetti?s poetry? Christina Rossetti struggled with living in a patriarchal society and she expresses this through a range of techniques and ideas which shape her poetry. The misogyny and sexual double standards Rossetti encountered, clearly influenced her writing however her views on women?s rights often comes across as conflicted in her poetry. Rossetti studies the significance of Women in Victorian society and is troubled by their place in the world, yet her belief that women should not have the right to vote for instance contradicts the message she often tries to convey in her poetry. Rossetti was a devout Anglo-Catholic and we can see the difficulty this caused in her life. For example, in 1848 she became engaged to James Collinson but broke it off when James converted to Roman Catholicism, she later fell in love with Charles Cayley but refused his hand in marriage, again due to religious differences. Her Religious views and upbringing appear to fight against her own misgivings about the patriarchal values and sexual double standards that define female identity in the Victorian era. ...read more.

Rossetti could be suggesting that it?s male dominance in positions of power which perpetuates the oppressive, patriarchal Victorian society she lives in. Later in the poem, when the princess is kept inside while the fight starts outside, she questions her own position in society. She asks, ?shall I touch my harp?shall I work the last gold stich?shall my woman stand a read some unimpassioned scene?. Rossetti paints a picture of upper middle-class women being restricted by society. The protagonist questions why all action must be taken by men while she sits inside and conform to this role set out for her, the repetition of the word ?shall? creates a sarcastic tone aimed at ridiculing the pointlessness in the activities she is expected to do. The princess suddenly says ?Nay, this thing I will do?, she rejects this idea of a passive, symbolic image which comes with being female royalty. She goes on to say, ?I will take my fine spun gold?I will take my gold and gems?, ?shall? has now been replaced with ?will? showing a determination and strength we haven?t seen until now. Rossetti presents upper-class women as being limited, without purpose or fulfilment, in this poem we see the protagonist stand up and take action herself, with the final heroic act of self-sacrifice in order to stop the fighting. ...read more.

She draws ?upon the findings and approaches of other kinds of criticism - Marxism?[4], by bringing in social position and exposing privilege but still criticising upper class gender roles and exploring the power relationships with lower class and upper-class women with men. This kind of analysis of gender roles was not properly seen until the 1980s so you can see how progressive Rossetti?s thinking was. ?From the Antique? is a very interesting poem, especially because she chose not to publish, it shows a deep despair of life under the patriarchy but fails to have any kind of resolution or answer like ?A Royal Princess? and ?Cousin Kate?, this possibly reflects her struggle with attacking the patriarchy whilst withholding her own religious beliefs. Ultimately Rossetti shows a clear understanding and resistance to patriarchal values and sexual double standards in Victorian society, her poetry conveys a strength and boldness to explore the role of women which we would now associate with feminism. However, she faces a constant battle between her religious beliefs and her feministic leanings, because of this she fails to give any coherent or clear answers in how to construct more gender equal roles and therefore leaves unanswered questions to anyone who analyses her poetry through feminist criticism. Word Count: 1654 ________________ [1] Barry, P: ?Beginning Theory? [2] Bertens, Hans ?Literary theory: the basics? [3] Bertens, Hans ?Literary theory: the basics? [4] Barry, P: ?Beginning Theory? ...read more.