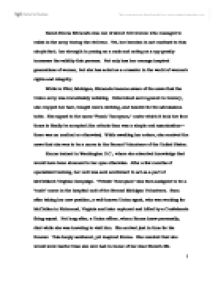 Sarah Emma Edmonds was one of about 400 women who managed to enlist in the army during the civil war. Yet, her heroism is not confined to this simple fact; her strength in posing as a male and acting as a spy greatly increases the validity this persona.

Sarah Emma Edmonds was one of about 400 women who managed to enlist in the army during the civil war. Yet, her heroism is not confined to this simple fact; her strength in posing as a male and acting as a spy greatly increases the validity this persona. Not only has her courage inspired generations of women, but she has acted as a crusader in the world of women's rights and integrity. While in Flint, Michigan, Edmonds became aware of the news that the Union army was immediately enlisting. Determined and ingrained in bravery, she cropped her hair, bought men's clothing, and headed for the admissions table. She signed to the name "Frank Thompson," under which it took her four times to finally be accepted (the criteria then was a simple oral examination-there was no medical or otherwise). While awaiting her orders, she received the news that she was to be a nurse in the Second Volunteers of the United States. Emma trained in Washington D.C., where she absorbed knowledge that would have been shunned to her eyes otherwise. After a few months of specialized training, her unit was sent southward to act as a part of McClellan's Virginia Campaign. "Private Thompson" was then assigned to be a "male" nurse in the hospital unit of the Second Michigan Volunteers. ...read more.

While making conversation with a one such individual, an officer approached her. He handed her a firearm ordered her to take the place of a picketer who had just been shot. This provided her with an opportunity to escape cross back over Confederate lines. When she returned, she was warmly welcomed and immediately granted a meeting with General McClellan himself, in which she revealed all the information she had acquired about Confederate fortifications. She then returned to her duties as a "male" nurse in her preceding volunteer unit. Approximately two months later, she was asked to, again, infiltrate Confederate limits. Fearing being recognized, she did not feel at ease returning as "Cuff;" so she chose the disguise of a large Irish peddler woman she deemed "Bridgett O'Shea." She was, once more, easily admitted into the same Confederate labor camp. As she sold various small items, she made conversation with her customers, a valuable information vehicle. After some time, she decided she had learned an adequate amount of data, and headed north. This time she returned with a horse named Rebel, named for its of their sense of individuality. On her journey northward, she obtained an arm wound, and yet still managed to carry on and elude Southern forces. Emma's volunteer unit was, shortly after, transferred to Shenandoah Valley, Virginia, in order to aid General Sheridan's efforts there. ...read more.

Discouraged, she took what little money she had, and bought a one-way train ticket to Washington. There, she found work as a nurse for the United States Christian Commission until the end of the war. Altogether, "Private Frank Thompson" had successfully completed eleven strenuous missions to her favor. After the end of the war, Emma gathered her most lurid memoirs to fill the pages of her book Nurse and Spy in the Union Army, which became unexpectedly popular and sold thousands of copies. Emma gave all the profits she earned from the book to the reconstruction effort. She quickly became homesick, and returned to her hometown in Canada. Sarah Emma Edmonds's effect on the American Civil War spans wider than her simple act of spying for the Union. Not only did her story go on to be read by thousands, but even disguised as a man, Emma managed to blaze a trail for women in the military. She made a statement about women's rights. She told the world that women can be in the army, they can become military officers, and they can hold a traditionally male-dominated position. Her "crusades" helped to change the generally mechanistic view of women from subservient lesser to valuable equal. Soon Before she died, Emma said (as quoted by Markle), " 'I am naturally fond of adventure, a little ambitious, and a good deal romantic-but patriotism was the true secret of my success.' " 1 ...read more.