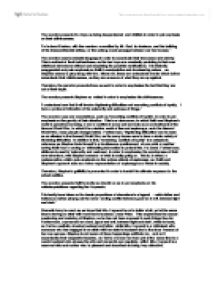 &quot;Spies&quot; analysis. The narrator presents the boys as being inexperienced and childish in order to put emphasis on their obliviousness.

The narrator presents the boys as being inexperienced and childish in order to put emphasis on their obliviousness. 'He's done it before, with the murders committed by Mr. Gort, for instance, and the building of the transcontinental railway, or the underground passage between our two houses.' The narrator uses bombastic language in order to accentuate their innocence and naivety. This is evident of their foolhardiness, as the two boys are constantly partaking in their own childhood adventures without contemplating the possible ramifications. It is blatantly exaggerated and puts emphasis on Keith's manipulative and domineering nature, as Stephen seems to play along with him. Moreover, these are antecedent events which further accentuate their obliviousness, as they are unaware of what they are up against. Therefore, the narrator presents them as such in order to emphasise the fact that they are out of their depth. The narrator presents Stephen as misled in order to emphasise his obliviousness. ...read more.

Hayward. Furthermore, sibilance is used in 'solemnity and sadness', in order to emphasise the sombreness of their new adventure, with Stephen unaware of what is really going on. This is, in effect, a metanarrative, which puts emphasis on the various effects of espionage, as Keith and Stephen's spywork acts as a minor representation of espionage as a whole in society. Therefore, Stephen's gullibility is presented in order to foretell his ultimate exposure to the actual realities. The narrator presents Keith's family as chaotic so as to put emphasis on his misinterpretations regarding the Haywards. 'His family have taken on the heroic proportions of characters in a legend - noble father and traitorous mother playing out the never-ending conflict between good and evil, between light and dark.' Dramatic irony is used, as we know that Mrs. Hayward is not a traitor at all, yet at the same time is having an affair with Aunt Dee's husband, Uncle Peter. ...read more.

It is also a hyperbole as it seems highly unlikely that commonplace people could attain the somewhat abnormal traits of characters from folklore. Therefore, Keith's family is depicted as being immersed in secrecy and as being vague in order to conceal their intentions. Stephen is presented as inarticulate so as to emphasise his insecurities. 'I find it very difficult now to reconstruct what I'm feeling - it's so large and complex. Perhaps the largeness of the feelings is the most noticeable thing about them.' A paradox is used so as to put emphasis on the genuinely sad tinge of the writing, as Stephen's low self-esteem is pathetic and it reveals that Stephen might not be a remotely interesting person, which accentuates how insecure Stephen is. Furthermore, largeness is italicised in order to put emphasis on Stephen's numerous emotions. Moreover, one can infer that Keith is a foil used to oppose Stephen's strong values and so this accentuates his vulnerabilities. Due to Keith, he finds it hard to express himself. Therefore, Stephen is presented as being unable to express himself in order to emphasise Keith's hold over him. ...read more.