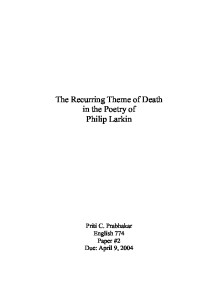 The Recurring Theme of Death in the Poetry of Philip Larkin.

The Recurring Theme of Death in the Poetry of Philip Larkin Priti C. Prabhakar English 774 Paper #2 Due: April 9, 2004 In reading the poetry of Philip Larkin for the first time, one is struck by the characteristically glum atmosphere that pervades most of his poems. The vast majority of his verse is devoted to what is generally taken to be negative aspects of life, such as loneliness and dejection, disappointments, loss, and the terrifying prospect of impending death. Evidently, there are uplifting and humorous sides to his work as well, but for certain reasons Larkin is invariably identified with a downhearted, pessimistic temper and tone of voice, conveying a constant sense of failure and of disappointment that underlies all the more specific emotions and reflections of individual poems. Frequently, Larkin is just sad, and one is amazed then at the wide range of things and events, from money ('Money': 'I listen to money singing...It is intensely sad.' (198)), to a delayed plane ('Autobiography at an Air-Station', where the person obviously had hoped to leave before sunset, but cannot, because his machine is several hours delayed. When he says: 'I set...So much on this Assumption. Now it's failed' (78), this response would appear a little oversensitive, did not the title indicate that something more is being dealt with here than just an afternoon at the airport), that can depress him. ...read more.

and asks: 'Where has it gone, the lifetime?' ('The View', 195). The reader gets the sense that Larkin's life was unfulfilled; his only outlet to express this emotion is through words. The reader also senses that Larkin felt that the only way to go now is to reach the end, or death, since life did not grant him his wishes and dreams. In 'Send No Money', the looming subject of death is not explicitly stated, but alluded to through his subtle construction of mood and emotion. There is an ultimate predicament covering not just individual aspects, but the totality of Larkin's situation. His dilemma is that he is discontent with life, and at the same time afraid of death. While passages to substantiate his 'Horror of life' ('The Life with a Hole in it', 202) can be found virtually everywhere in Larkin's work, traces of his fear of death occur increasingly in his later volumes, and quite naturally so, because his dilemma is growing ever more severe as his lifetime gradually runs out. A remarkably unveiled expression of Larkin's fear of death can be found in 'Aubade', one of his very last poems: Till then I see what's really always there: Unresting death, a whole day nearer now, Making all thought impossible but how And where and when I shall myself die. ...read more.

It is pretence, meaningless for Larkin. "this is what we fear - no sight, no sound, no touch, no taste..." True to his age, Larkin laments the chaos that is loss of belief and certainty, seeking underneath everything some order and certainty, and indeed he ends with a firm, if sad "Work to be done," and evokes regularity and order with the day to day running of life where "postmen like doctors go from house to house". Larkin just sees detached postmen or doctors aimlessly going from house to house, conveying that there is no sense of human contact and interaction, or want of it. For Larkin, a sense of loss seems to be inevitable as life goes on, and his fatalistic - and somewhat bewildering - contention is that the course of one's life is essentially independent of one's actions. However, Larkin does not explicitly point the finger at one person, group or institution, although he comments on parents, society and love as being flawed in other poems. Larkin's message of his poetry, coupled with the recurring theme of death, is that things just happen to be the way they are, without anyone particularly wanting them to be so - a conclusion that furthermore is very much in line with Larkin's fatalistic frame of mind. ...read more.

An excellent essay which although it took some time to focus on the question showed a very good understanding and knowledge of Auden's poems and his relationship to
death. Well written and perceptive comments are well supported by appropriate quotes. Close analysis of language accurately uses literary terminology.