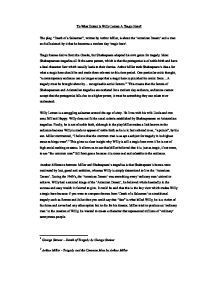 To what extent is Willy Loman a tragic hero?

To What Extent Is Willy Loman A Tragic Hero? The play, "Death of a Salesman", written by Arthur Miller, is about the 'American Dream' and a man so disillusioned by it that he becomes a modern day 'tragic hero'. Tragic heroes derive from the Greeks, but Shakespeare adapted his own genre for tragedy. Most Shakespearean tragedies all fit the same pattern, which is that the protagonist is of noble birth and have a fatal character flaw which usually leads to their demise. Arthur Miller took Shakespeare's ideas for what a tragic hero should be and made them relevant to this time period. One particular critic thought, "a contemporary audience can no longer accept that a tragic hero is punished by comic force...A tragedy must be brought about by... recognisable social factors." 1This means that the factors of Shakespearean and Aristotelian tragedies are outdated for a modern day audience, audiences cannot accept that the protagonist falls due to a higher power, it must be something they can relate to or understand. Willy Loman is a struggling salesman around the age of sixty. ...read more.

At the beginning of the play we learn of Willy's car accidents, Linda asks, "you didn't smash the car, did you", this is significant as later the audience learn that Linda believes Willy is attempting to commit suicide and his constant "accidents" are in fact deliberate. It is also significant as it foreshadows Willy's suicide at the end of the play. Throughout the play Willy's emotional and mental state is constantly deteriorating, this is exceptionally clear to the audience when Willy imagines his dead brother Ben and starts having a conversation with him, "I'm getting awfully tired, Ben". Whenever Willy seems to be struggling to cope with the present situation he reverts back to the past and his sanity depletes as he begins to see his brother Ben. Willy's flashbacks are key to understanding the play. Willy kills himself because he believes that his death will end his family's money troubles and help his son Biff start a business, which in itself could be seen as honourable and heroic, but this aspect is also relatable for the audience because all parents want to give their children a better life. ...read more.

People don't always learn from other people's mistakes, which is true of Happy, "I'm gonna show you...Willy Loman did not die in vain. He had a good dream. It's the only dream you can have". This is a clear sign that he is still deluding himself and has not learnt anything from his father's tragic death. However, Biff helps create Willy as a tragic hero, because he does learn that Willy's beliefs which he clung to desperately all his life were not actually that important, "He has the wrong dreams". From this we can see that Biff has learned from his father's tragic death, finally understanding what Willy failed to, which is that there are more important things in life than being well liked and than living 'The American Dream'. Biffs realisation of Willy's downfall could be considered as a sense of catharsis, as for Biff everything is clear now. This links in to the aspect of Willy being a tragic hero as with the traditional genre the audience and other characters gain a sense of catharsis. To conclude I would describe Willy as a modern day tragic hero due to the trials and tribulations he endured in order to give his family the dream he was never able to achieve. ...read more.

This essay engages with the concept of tragedy well, but I don't think direct comparisons with Shakespearian tragedies is the best way to construct an argument. If I were answering this question, I would begin with a strong introduction using ...

This essay engages with the concept of tragedy well, but I don't think direct comparisons with Shakespearian tragedies is the best way to construct an argument. If I were answering this question, I would begin with a strong introduction using Miller's essay "Tragedy and the Common Man" to begin the argument that the play is still a tragedy, and then summarise the main characteristics of a tragic hero in this context. The question isn't asking "To what extent is Willy Loman a Shakespearian tragic hero?" so comments such as "Another difference between Miller and Shakespeare's tragedies" adds nothing to the argument. The most sophisticated arguments will be looking at how Miller has adapted tragedy.

The analysis here is basic, and there is little focus on literary construction. Comments such as "Music is also heard throughout the play, it is used to represent Willy's inability to focus on reality" show potential, but there is no real evidence of how it is used and what effect it has on the audience. Whenever you are analysing tragedy, I would always recommend referring all your points back to how the audience respond, as this allows a discussion on the reception and intent of the play. This essay has the tendency to retell, rather than analyse, and this is mostly due to the poor structure of the argument. If the essay had chosen to analyse a few main characteristics of a tragic hero, they wouldn't have to narrate with comments such as "He never comes to terms with reality". Looking at dramatic techniques such as soliloquies would be relevant here.

This essay has a poor structure, as mentioned above. The introduction offers nothing - examiners will hate to see introductions which simply explain the author of the play and a short plot summary. Instead, introductions should engage with the question and set up a cogent argument. Similarly, the conclusion is poor - it may seem to draw upon evidence, but this is not clear, and the use of the first person should be avoided. Using the first person makes any views seem personal, whereas arguments should be built upon the foundations of evidence and analysis. Spelling, punctuation and grammar are fine.