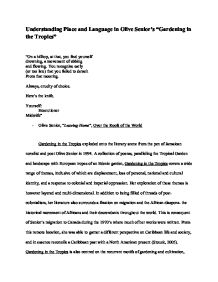 Understanding Place and Language in Olive Senior's &quot;Gardening in the Tropics&quot;

Understanding Place and Language in Olive Senior's "Gardening in the Tropics" "On a hilltop, at that, you find yourself drowning, a movement of ebbing and flowing. You recognize early (or too late) that you failed to detach From that mooring. Always, cruelty of choice. Here's the knife. Yourself: Executioner Midwife" - Olive Senior, "Leaving Home", Over the Roofs of the World Gardening in the Tropics exploded onto the literary scene from the pen of Jamaican novelist and poet Olive Senior in 1994. A collection of poems, paralleling the Tropical Garden and landscape with European tropes of an Edenic garden, Gardening in the Tropics covers a wide range of themes, inclusive of which are displacement, loss of personal, national and cultural identity, and a response to colonial and imperial oppression. Her exploration of these themes is however layered and multi-dimensional. In addition to being filled of threads of post-colonialism, her literature also surrounds a fixation on migration and the African diaspora- the historical movement of Africans and their descendants throughout the world. This is consequent of Senior's migration to Canada during the 1970's where much of her works were written. From this remote location, she was able to garner a different perspective on Caribbean life and society, and in essence reconcile a Caribbean past with a North American present (Stouck, 2005). Gardening in the Tropics is also centred on the recurrent motifs of gardening and cultivation, especially within the context of a distinctly Caribbean garden plot. ...read more.

However, she regains her love for the land that was originally hers with the assertion of "you cannot take away/ the sun dropping by for a chat/ I want to feel/ you cannot stop/ Yellow Macca bursting through/ the soil reminding us/ of what's buried there" (Senior, 2005). Once the speaker reclaims the land, she conquers her identity and asserts her refusal to be dominated any further. Olive Senior thus emphasizes the need for us to understand that our identity lies in regional space. Because of our history, that of years of working this land, it is who we are. Rather than deny it, we must embrace the complexities our cultivation will reveal to us, as this is the only means through which we will achieve the lasting liberation we desire. Marlene Phillip (1989) asserts "English for women writers from the Caribbean can be both a 'mother tongue' and a 'foreign language/ l'anguish'". It is perhaps for this reason that many of Senior's personas in her poems speak both Creole and Standard English, flawlessly switching between the two. This highlights the key difference between the "father tongue" and the "mother tongue". The "father-tongue" (Standard English) is laced with patriarchal myths and is not language but 'l'anguish' for the persona. The "mother tongue" (Creole or Patois) becomes the language of the persona as it enables self-expression to a greater extent than Standard English. ...read more.

As a post-colonial diasporic writer, the act of gardening is essential to Olive Senior's discourse on place and language. She must unearth centuries of buried practices, traditions and cultures, and in the process determine those keys elements which define her personal identity. It is a deeply therapeutic and cathartic process, but on the other hand it represents a struggle to understand one's place and furthermore, to effectively express what one feels for this place. These cultivated works aim to merge the pre-colonial past with the colonial experience, to create a truthful account of our lived experiences that is unlike the falsehoods that have been created about us for centuries. Their objective is to disrupt the continuance of an identity crisis. They disclose the absolute truth of distinction between who we were, and what colonization made us, so that we understand the genesis of our language and culture, and that it is our regional space that will determine this cultural identity. Gardening in the Tropics, as a post-colonial work of fiction from diasporic writer fulfils this purpose and promotes confidence in cultural identity, irrespective of place and language. Senior stretches the boundaries of the genre of poetry through her careful manipulation of the voice, context and language of these poems, crafting them in ways that totally defy pre-conceived notions of how not just poetry is supposed to sound, but how it looks. She obliterates all kinds of limits and the end results are that of poems unconventionally compiled, which detail a definitely unconventional message. ...read more.

This is an excellent, beautifully written essay. Complex topics are thoughtfully and intelligently explored. Evidence of research is shown by inclusion of numerous critical voices, other poets (Nichols) and writers (Rhys) are cross referenced. A thoughtful and intelligent essay which does at times sacrifice conventional close analysis of the language of the poems in order to explore the bigger picture of displacement and colonialism.