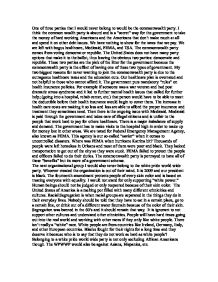 US Politics - groups I could never support.

We are taxed for Federal Emergency Management Agency, also known as FEMA. This agency is our so-called "savior" when it comes to uncontrolled disasters. Where was FEMA when hurricane Katrina hit? Thousands of people were left homeless in Orleans and most of them were poor and black. They lacked transportation to get out of the city so they were stuck. FEMA failed to protect the people and officers failed to do their duties. The commonwealth party is portrayed to have all of these "benefits" but its more of a government scheme. The next organizational group I would also never belong to the white pride world wide party. Whoever created the organization is out of their mind. It is 2009 and our president is black. The fourteenth amendment protects people of every skin color and is based on treating everyone with equality. I would not stand for only supporting "white power." Human beings should not be judged or only respected because of their skin color. ...read more.

I don't agree with the national pro life alliance group. I think woman should be able to decide if they want an abortion or not. There are certain situations that are beyond our control, such as, getting raped, or the chance that giving birth could kill you. Those are the certain occasions that I feel are acceptable to getting an abortion. It should be the woman's decision to decide whether she is capable of having a child or not. Although I can see how some people would think it is taking a life of a child, there are people out there already with numerous kids, living off welfare, and another child on the way. Hard working citizens of America pay for their welfare. Another reason I don't agree with this is because you have woman getting pregnant while on drugs and they have crack babies that end up living hard lives. Those are just three of the many organizational groups in the United States of America that I think are ridiculous. ...read more.