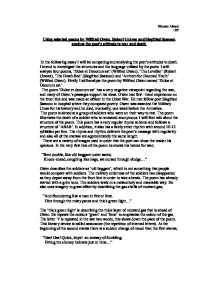 Khuram Akram 10T Using selected poems by Wilfred Owen, Robert Graves and Siegfried Sassoon analyse the poet's attitude to war and death In the following essay I will be comparing and analysing the poet's attitudes to death. I intend to investigate the structures and the language utilised by the poets. I will analyse four poems, 'Dulce et Decorum est' (Wilfred Owen), 'The Leveller' (Robert Graves), 'The Death-Bed' (Siegfried Sassoon) and 'Anthem for Doomed Youth' (Wilfred Owen). Firstly I will analyse the poem by Wilfred Owen named 'Dulce et Decorum est.' The poem 'Dulce et decorum est' has a very negative viewpoint regarding the war, and many of Owen's passages support his ideas. Owen had first -hand experience on the front line and was made an officer in the Great War. He met fellow poet Siegfried Sassoon in hospital where they compared poetry. Owen was awarded the Military Cross for his bravery and he died, ironically, one week before the Armistice. The poem is aimed at a group of soldiers who were on their way to rest. The poem illustrates the death of a soldier who is remained anonymous. I will first talk about the structure of the poem. ...read more.

This stanza shows that there is a huge contrast in the ways that the two people are dying. The experienced mercenary soldier is crying for his mother, when people expect him to have a 'patriotic' death. However, the youth soldier dies in a very contrasting way than we would expect him to. This illustrates Graves' opinion of death, it proves that death has different effects on different people, and that death doesn't discriminate people. The last stanza of the poem contains very deep irony; "He died a hero's death: and we... Deeply regret his death: we shall All deeply miss so true a pal." This is very ironic because it was not a heroic death. The sergeant also probably has no idea who they are and he personalises them as his 'pal'. This signifies that they are empty words and that the sergeant has not put any thought into them. To conclude, 'The Leveller' is about death itself. It describes the two people involved, whereas in 'Dulce et Decorum est' the person involved remains anonymous. Robert Graves' poem is about fatalism and he gives the readers a savage reminder that not everyone is fighting for the same reason. ...read more.

Sassoon does not provide the word 'death' with a capital letter because he does not want to increase death's importance. I believe that the poem is about innocent lives being taken away. In addition, it is also about millions of soldiers being denied the right to die peacefully. I feel that it is a juxtaposition of silence and sound as the soldier slips away. I think that this poem links with both of Wilfred Owens' poems due to that fact that both of them talk about the waste of innocent and young lives. I believe that it can also be related to 'The Leveller' because it relates to death and both poems personify death in fairly similar ways. In conclusion, I believe I have revealed the poets' attitudes to war and death. All of the poets have strong attitudes against the war, but others like Siegfried Sassoon have a more extreme opinion than other. All poems had similar messages to the readers, they were contrasting to the propaganda-like images, which were shown to families at home. Personally, I enjoyed 'Dulce et Decorum est' the most because I liked the sarcasm at the end of the poem, when he informed us about the Latin motto. I was also fond of the rhyme scheme because it was regular through the whole poem and it was easy to read the poem. ...read more.